Increase in US Eating Disorders During Pandemic

Update Required To play the media you will need to either update your browser to a recent version or update your Flash plugin.
By Anna Matteo
07 June 2021

In the United States, restrictions are loosening and COVID-19 cases are decreasing. However, eating disorder cases are on the rise, report doctors and specialists. 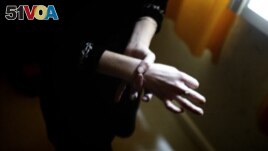 FILE - Helene, a 28-year-old woman, shows the size of her wrist as she stands in her apartment in Bourges, France. She had been diagnosed with anorexia. (AFP Photo)

For people with eating disorders, the pandemic created a more dangerous situation. In lockdown, feelings of anxiety and loneliness are common. Experts warn that being alone and feeling anxious can increase the severity of eating disorders.

"We are absolutely seeing massive increases," said Jennifer Wildes. She is an associate psychiatry professor and director of an eating disorders program at the University of Chicago Medicine.

Wildes told the Associated Press that some patients are waiting four to five months to get mental health treatment and medication. Before the pandemic, she added, wait times were usually only a few weeks. Currently, Wildes' program treats about 100 patients. Before the pandemic, the number of patients was half that amount.

A treatment program for eating disorders at the University of Minnesota is experiencing the same thing. Daily calls to its program from people seeking treatment have doubled. In 2019, there were about 60 calls a day. Since the pandemic began, that number is up to 130 calls a day, said Jillian Lampert. She is one of the leaders of the program.

Lampert stated that increases were seen in all races and ages. She says, however, that women and girls are more commonly affected than men.

Some of her patients have told Lampert that their lives feel "out of control" because of the pandemic. As a result, they use binge eating as a way to deal with their problems.

Binge-eating is a disorder in which a person often eats large amounts of food and feels unable to stop.

Other people are doing the opposite of binge-eating. They are taking the message "don't gain pandemic weight" to the extreme. They are restricting their meals to the point of anorexia.

Anorexia is one of the more common eating disorders. Anorexic people restrict eating to achieve extreme weight loss. It can cause abnormally low blood pressure and organ damage.

Bulimia is another eating disorder. Bulimic people eat large amounts of food and then force themselves to throw it up.

Peyton Crest, an 18-year-old from Minnetonka, Minnesota, said she developed anorexia before the pandemic. She has relapsed twice since it began.

When her classes moved online, she suddenly lost her support system of friends and classmates. She would spend all day alone in her room and could only think of food and her anorexic behavior.

She got treatment last June but then relapsed last September and spent almost two months in a treatment center.

Her school recently returned to in-person classes. And she was accepted to Rhodes College in Memphis, Tennessee. Crest says her mental health has improved greatly.

How widespread are eating disorders?

Eating disorders affect at least 9 percent of people worldwide. They will affect nearly 30 million Americans in their lifetimes and cause about 10,000 U.S. deaths each year. These numbers come from the National Association of Anorexia Nervosa and Associated Disorders.

A study of electronic medical records from about 80 U.S. hospitals found a 30 percent increase starting after March 2020, compared with numbers from 2019 and 2018. The study was published in April in the Epic Health Research Network journal.

The leader of the Epic study is family doctor and researcher Dr. Dave Little. He said that the COVID pandemic has given society, and in particular young people, a lot of mental health difficulties.

"This has been a big event that has disrupted a lot of people's lives in many ways," he said. It may be months or years before we know the true damage, Little added.

But he said the information should serve as a warning to parents and health care providers.

"Talk to your kids. Talk to your patients. Ensure that eating behaviors remain healthy," Little warned. He added that "the sooner you respond the better."

Here are some signs of eating disorders from the U.S. National Eating Disorders organization.

Lindsey Tanner reported this story for the Associated Press. Anna Matteo adapted it for VOA Learning English. Susan Shand was the editor.

anxious – adj. afraid or nervous about what may happen

relapse – v. a recurrence of symptoms of a disease after a period of improvement

disrupt – v. to cause (something) to be unable to continue in the normal way : to interrupt the normal progress or activity of (something)