Update Required To play the media you will need to either update your browser to a recent version or update your Flash plugin.
By Ashley Thompson
18 June, 2018

The opening weekend of the animated film Incredibles 2 was incredible.

The Disney-Pixar movie recorded a North American opener of $180 million. That is the best of all time for an animated film. It beat the earlier record of the 2016 Pixar hit Finding Dory.

The first Incredibles film came out in 2004. It was a major success among moviegoers and film critics. Excitement for the sequel has been strong. 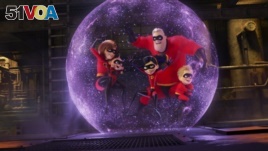 This image given by Disney Pixar shows a scene of the movie Incredibles 2.

Film business expert Paul Dergarbedian said the film "shows the drawing power of the superhero genre, whether in the live action or animated" kind.

Disney's head of distribution, Cathleen Taff, credits the huge opening weekend to the long wait for another Incredibles film.

Incredibles 2 picks up directly following the events of the earlier film. Members of the Parr family continue to try to have a normal life even with their superpowers. Holly Hunter, Craig T. Nelson, Sarah Vowell, and Samuel L. Jackson return in their voice roles. Bob Odenkirk, Catherine Keener, and Sophia Bush voice new characters. Brad Bird returned to write and direct the sequel.

Incredibles 2 has the third-biggest opening of 2018 so far. The top two -- Black Panther and Avengers: Infinity War -- were also Disney productions.

genre - n. a particular type or category of literature or art

distribution - n. the act of delivering something to a store or business

role - n. the character played by an actor