Update Required To play the media you will need to either update your browser to a recent version or update your Flash plugin.
By Phil Dierking
03 April, 2018


American Chris Spear has been cooking food for others since he was 16 years old.

Spear has worked for a chef at large restaurants, and even had almost 100 employees reporting to him.

But there came a time when he grew tired of this job and wanted to be more creative. So he stopped working for restaurants and set up his own food catering business. It is called Perfect Little Bites.

Spear told VOA that spending many hours preparing food doesn't make him feel tired. But he was concerned that becoming an independent chef, and not working in a restaurant, would make him feel lonely.

That led him to create an online networking group called Chefs Without Restaurants. It is a place for chefs to exchange ideas, advice, and even customer referrals.

Spears says that, while the service is new, the idea for it is not.

"I've been thinking about the Chefs Without Restaurants for about five years now, even before I took Perfect Little Bites full time because I kept thinking about, 'Well, when I do this full time, who are going to be my colleagues? Who are going to be the people who I can bounce ideas off? How am I going to be able to do things like cater an event that's maybe outside my range of 30 people? Like, do I have a resource where I can pull in one or two other people?"

Spear said he didn't feel like having full-time employees for his catering business. But he did want a way to communicate with others in the food preparation business.

The online group started last January. Since then, around 100 chefs have joined it. 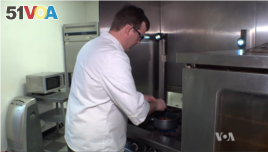 Chris Spear, founder of Chefs Without Restaurants, working in a kitchen.

Spear said that independent chefs have many different kinds of businesses, but don't always get recognized. He wanted to use the group to bring attention to chefs who normally would not get it.

"I wanted to have something that's beneficial, but also didn't cost money. We are a Facebook group where I can just post and say, ‘hey next Wednesday a customer wants to do dinner here and the price range, where they live, if anyone is maybe interested, send me a personal message and I get you their info(rmation)."

Spears thinks this network can help those not working in the food service industry. He and other chiefs are building a website that lists the group's members, what their specialties are, which ones are able to cater large parties and personal chefs for smaller events.

Cooperation instead of competition

Lana and Bobby Browner are a wife and husband team who own their catering business Bent and Bent Events in Frederick, Maryland.

The Browners specialize in Creole and Caribbean cooking. They also prepare and mix together foods that are available locally, in Frederick County, Maryland.

When the Browners heard about Chefs without Restaurants, they decided to become members.

The biggest difficulty for many chefs, they said, is that they don't often form partnerships because they are competing for business.

"But you don't have that in this group," Lana Browner noted. "What we experience so far is a lot of learning about different chefs in the area." It's even been interesting to get comments from chefs that work outside Frederick, she added.

Chefs without Restaurants is also bringing more business to local eateries. One example is Maryland Bakes, a place where members often meet and prepare food in a common area.

"They bring connections," she says. "They bring creative ideas and just the whole network of independent people joining together."

The group is popular with the local food community.

Olive Oil and Vinegar is one of the local stores Spear likes to visit. It often holds events to present cooking ideas and let chefs meet their customers.

She adds that it's difficult for small businesses, and many don't succeed, so it's important they work together.

Faiza Elmasry wrote this story for VOANews. Phil Dierking adapted her story for Learning English. George Grow was the editor.

What other independent workers could benefit from this kind of organization? We want to hear from you. Write to us in the Comments Section or on 51VOA.COM.

bounce - v. to talk about (something, such as an idea) in an informal way in order to get different opinions about it

cater - v. to provide food and drinks at a party, meeting, etc., especially as a job

colleague - n. a person who works with you

flexible - adj. capable of bending or being bent

network - n. a group of people or organizations that are closely connected and that work with each other

range - v. a group or collection of different things or people that are usually similar in some way

referral - n. the act of sending someone to another person or place for treatment, help, advice, etc.

resource - n. something that a country has and can use to increase its wealth