Update Required To play the media you will need to either update your browser to a recent version or update your Flash plugin.
By George Grow
24 September, 2014


India has won the Asian race to Mars. India successfully placed a spacecraft into orbit of the "Red Planet" early Wednesday. The spaceship traveled hundreds of millions of kilometers from Earth over a 10-month period.

The Mars Orbiter spacecraft will take pictures of the Martian surface. It will also attempt to identify the amount of methane in the planet's atmosphere.

Scientists have been following the flight from the command center of the Indian Space Research Organization in Bangalore. Officials have named the spaceship "Mangalyaan," which means Mars craft in the Hindi language.

The scientists cheered and shook hands as the spacecraft entered into the orbit of Mars. Before that, they watched for a tense hour as Mangalyaan changed direction and fired its engines for about 24 minutes. The action helped the spacecraft slow down to enter into orbit.

"History has been created today. We have dared to reach out into the unknown and have achieved the near impossible."

Pavalla Bagla spoke with VOA's Victor Beattie from the command center in Bangalore. Mr. Bagla wrote the book Reaching for the Stars: India's Journey to Mars and Beyond. He noted India's success in placing a spacecraft into the orbit of Mars on its first attempt. 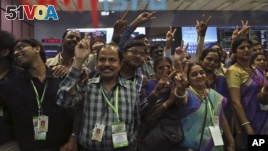 "Russia and America both failed in their maiden attempts. So this a glorious moment for India, and India has done it in the very first attempt. It really shows India's great technological progress."

"Could you tell me what you thought the chances were of a successful orbiting of Mars?"

"If you look at the success rate of missions to Mars, there have been, 51 missions to Mars, and more than half of failed. So the possibility of India's Mars orbiter mission, or Mangalyaan, succeeding was less than the flip of a coin, and that India managed to do it in its first attempt really shows the hard work and confidence which the Indian space agency had in its own program."

Mr. Bagla says the main geopolitical goal of this mission was to be the first in India's Asian space race with China. He adds that the Indian space program has yet to set a date for sending men into space.

Mr. Bagla noted that the success comes just days before Prime Minister Modi's first state visit to Washington, DC. He said Mr. Modi can bring with him a message that India is a nation that now possesses high technology.

*This report is based on stories from VOA reporters Victor Beattie and Anjana Pasricha. George Grow wrote it for Learning English. Caty Weaver was the editor.

planet – n. a large object in space that orbits the sun

surface – n. the outer side or top of something

command – adj. done on command or request; v. to order; to have power over something