Update Required To play the media you will need to either update your browser to a recent version or update your Flash plugin.
By Dan Novak
08 September 2022


India and Bangladesh have signed a water-sharing agreement. Under the deal, the two countries agreed to cooperate in the use of the Kushiyara River.

Hasina signed the deal on a four-day visit to India that many consider politically important for her home country. A general election is planned for next year. 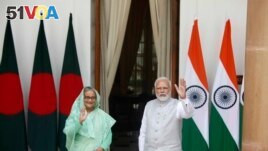 The deal on the Kushiyara River is the first of its kind between the countries since 1996. It will help southern parts of Assam state in India and the Sylhet area in Bangladesh, Modi said.

But the two countries could not reach an agreement on another river. For many years, Bangladesh has pushed for a deal on water sharing for the Teesta River, a major border river. It begins in India's Sikkim state and runs through the north of West Bengal state before entering Bangladesh.

In 2011, India agreed to share water during the dry season, between December and March. But a deal was never reached because of opposition from West Bengal state's chief minister. The unresolved issue has long angered Bangladesh, where many have been critical of Modi for not making progress on the agreement.

Hasina has kept a strong relationship with India since becoming prime minister in 2009. She said: "We hope that all our outstanding issues, including the Teesta water sharing treaty, would be concluded at an early date," she told reporters.

They also announced the completion of the first part of the Maitree Thermal Power Plant. It is joint project that will improve Bangladesh's electricity production. The project has long faced local and worldwide opposition.

In 2016, the United Nations agency UNESCO said it threatens the world's largest mangrove forests in the Sundarbans national park, which are less than 15 kilometers away.

The power plant is expected to release up to 592 million tons of carbon dioxide over its lifetime, said the Institute for Energy Economics and Financial Analysis, a research group. However, officials in both countries have backed the project, especially since energy prices have increased after Russia's invasion of Ukraine.

Last month, Bangladesh ordered schools to close an extra day each week and government offices to cut short their workdays by an hour to reduce electricity use.

China also is involved in many major infrastructure projects in Bangladesh. India has aimed to get involved in more joint projects like the power plant. India is currently Bangladesh's largest trading partner in South Asia.

Both leaders have directed their ministers to begin negotiations on a larger economic partnership agreement this year.

Hasina said India is "the most important, closest neighbor for Bangladesh."