Extreme Heat in India Kills Over 1100

Update Required To play the media you will need to either update your browser to a recent version or update your Flash plugin.
By Anjana Pasricha
28 May, 2015

Indians who had a choice stayed inside buildings or at home to escape the killer heat. But tens of thousands of people did not have that choice. Many of them are employed as construction workers, taxi drivers and street vendors, who make a living by selling goods to passersby.

Shaibaz Qureshi drives an auto rickshaw in the city of Hyderabad. 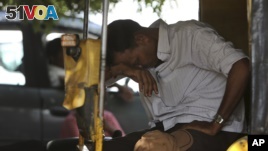 An Indian auto rickshaw driver rests on a hot summer day in Hyderabad, India, Monday, May 25, 2015. (AP Photo/Mahesh Kumar A.)

He says that the weather is a problem. But if he stops working, he will not be able to earn money.

The number of heat-related deaths has climbed over the past week. Most of the deaths have been reported in the states of Andhra Pradesh and Telangana. That is where the highest temperatures were recorded.

Y.K. Reddy is a weather expert and the head of the Meteorological Department in Hyderabad. He told VOA this is the worst heat wave to hit the area in nearly 10 years.

He says this summer season three records have been broken. In other places records are not broken, but they have reached 47 degrees plus in coastal Andhra Pradesh.

High temperatures are common in India in May and June. Dry winds blowing from the Northwest have intensified the heat recently all across northern and central India. The hot weather has reached the capital, New Delhi. A national newspaper, Hindustan Times, showed a picture of street tar and paint melting on the stripe markings of a walkway.

Sunil Kumar Aledia is with the Center for Holistic Development in New Delhi. He says homeless people are the most at risk from the extreme heat. He says these men and women usually spend the night in government shelters during the winter months. But they get no break from hot weather at this time of year.

Mr. Aledia says the shelters are usually cabins or tin structures, and in the summer they are only 10% full. He says this is because they lack electric fans, coolers or drinking water facilities. So they become very hot.

Officials in the worst affected states advise people to stay inside buildings during the afternoon, when temperatures are the highest. They also say people should drink plenty of fluids and not go outside without a hat. In some places, doctors were told to cancel their leave plans because hospitals had so many cases of heat stroke, a serious heat-related disorder.

Many taxis in Indian cities operate without air conditioning equipment. In Kolkata two taxi drivers died from heat stroke last week. Their deaths led labor unions to tell taxi drivers that they could turn down passengers in the afternoon. In the eastern state of Orissa, the government advised laborers to suspend hard work between late morning and four o'clock in the afternoon.

The arrival of monsoon rains could offer some help from the oppressively high heat. But the worst affected states may not get an early break. That is because the rains get to the south and west of India first, before arriving in the northern and eastern plains. But in Hyderabad, Mr. Reddy is hoping that a rare thunder shower will lower temperatures in the coming days.

Reporter Anjana Pasricha wrote this story for VOA. Anne Ball adapted it for Learning English. George Grow was the editor.