Update Required To play the media you will need to either update your browser to a recent version or update your Flash plugin.
By Anne Ball
18 February, 2017

The government-run Indian Space Research Organization (ISRO) said the rocket launched from Sriharikota in eastern India. It broke Russia's record of launching 37 satellites one year ago.

Most of the satellites are so-called nano satellites—small ones weighing up to 10 kilograms. There is also an Earth observation satellite that weighs 714 kilograms.

The majority of the nano satellite customers were from the United States. Others were from Kazakhstan, the Netherlands, Israel, Switzerland and the United Arab Emirates.

The launch was broadcast on Indian national television. It showed scientists in the mission control room, cheering as the rocket flew higher.

India's Prime Minister Narendra Modi tweeted that the "remarkable feat by ISRO is yet another proud moment for our space scientific community and the nation." 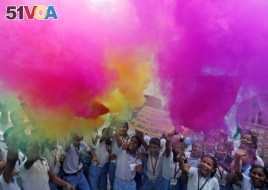 School children light fireworks as they celebrate India's Satellite Launch Vehicle's take off which carried 104 satellites in a single mission, at a school in Ahmedabad, India, Feb. 15, 2017.

India's space program has centered mostly on low-cost ways to get into space. In 2014, an Indian spacecraft reached Mars' orbit. The ISRO Mars mission cost $74 million. In comparison, the United States space agency, NASA, spent $670 million on its Mars mission a few months later. India's effort was welcomed as evidence that an economical program can achieve technological success.

Rajeswari Pillai Rajagopalan is a space expert with New Delhi's Observer Research Foundation. She said this record breaking satellite launch highlights India's technological "sophistication." She said it may lead more countries ask the ISRO to do their space launches.

Growing demand for more high-tech communication systems among governments has increased demand for such launches. So, has the growing demands of private telephone, Internet and other tech companies. Last year, India launched 75 satellites for foreign customers.

The South Asian country increased the budget for its space program this year. It also has set up a fund for a possible second mission to Mars and its first to Venus.

But scientists say that while India can put smaller satellites into space, it still has some way to go before it can launch heavier ones.

Anjana Pasricha wrote this story for VOA. Anne Ball adapted her story for Learning English with additional material from the Associated Press. Caty Weaver was the editor.

highlights – v. to make people notice or be aware of something

sophistication – adj. having or showing a lot of experience and knowledge about the world and about culture, art, literature, etc.

fund – n. an amount of money that is used for a special purpose