India Looks to Become Arms Supplier Instead of Buyer

Update Required To play the media you will need to either update your browser to a recent version or update your Flash plugin.
By Kelly Jean Kelly
23 April, 2015

Mr. Modi wants to change that. He is urging a "Made in India" policy that extends to the country's defense needs. He has even said the country should try to export weapons.

The United States is already partnering with India to produce weapons with Indian companies. For example, the U.S.-based Lockheed Martin company joined with India's Tata Advanced Systems to produce parts for the C-130J Super Hercules plane. 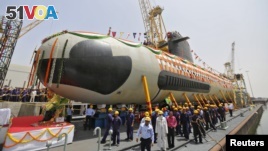 Rahul Madhavan is the director for aerospace and defense with the U.S.-India Business Council. He says the Defense Trade and Technology Initiative is a sign of change. That program calls for U.S. and Indian defense firms to produce weapons together rather than continue the buyer-seller relationship.

Mr. Madhavan said the program is a sign of the power the U.S. sees in the Indian market.

"You can look at India as an export market for the world... 'Make with India,'" not just "Make in India," he says.

Similarly, Sweden's Saab is trying to sell their light, single-engine Gripen planes to India's air force. Saab is proposing to produce the Gripen in India with a local partner.

Mr. Grevatt says many of China's customers are "economically challenged" countries and must rely on China until they pay for the cost of the weapons.

A more powerful China is a concern for India and the U.S., says Lisa Curtis, a senior researcher at the Heritage Foundation in Washington, D.C. Ms. Curtis says the U.S. sees India's growing defense budget as a way to balance China.

But many experts are asking whether India's defense industry can really challenge China's export business and political weight.

One reason India's defense industry is slow to grow is restrictive policies. A law limits the level of foreign ownership in a defense partnership to 49 percent. In other words, a U.S. defense firm would not have a majority share in the company.

Mr. Madhavan of the U.S.-India Business Council says U.S. companies will want to have control of the intellectual property. "Billions of dollars of taxpayer money is invested into research and engineering," he says.

Most industry experts do not think India will be a major player in global weapons exports soon. In fact, Jon Grevatt of IHS Jane's says India's weapons export business will struggle in the global market for many years to come.

Idrees Ali reported this story, with some material from Reuters. Kelly Jean Kelly wrote it for Learning English. Hai Do was the editor.

initiative - n. a plan or program that is intended to solve a problem

intelligence - n. secret information that a government collects about an enemy or possible enemy

restrictive - adj. limiting or controlling someone or something