Update Required To play the media you will need to either update your browser to a recent version or update your Flash plugin.
By Ashley Thompson
28 February, 2018

Thousands of mourning fans paid their respects Wednesday to one of Bollywood's biggest stars, Sridevi Kapoor.

The actress drowned in a hotel bathtub February 24 in Dubai, where she was attending a wedding. She was 54 years old.

Sridevi's body was flown home from Dubai to Mumbai on Tuesday night and taken to a private club. By early Wednesday, tens of thousands of sad and shaken fans had formed a line outside the club for their chance to honor her. 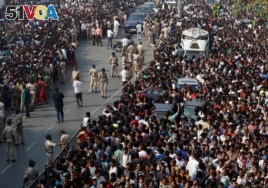 Description: Crowd of fans gather outside the venue of the funeral of Bollywood actress Sridevi in Mumbai, India, February 28, 2018. REUTERS/Danish Siddiqui

One mourner named Prashant said he arrived in the early morning. He told the Associated Press he had seen all Sridevi's movies. Prashant held a small collection of flowers. "No matter how long I have to wait, I will wait. I'll wait until I'm able to pay my respects," he said.

Inside the club, the actress's body was placed on a raised surface. The room held many flowers. Her husband, producer Boney Kapoor, and daughters stood by the body as fans and friends walked past in respect.

Fans also lined the roads to watch as the vehicle carrying her body to the passed on its way to the funeral. Sridevi's body was covered with an Indian flag. She was cremated with state honors.

Sridevi appeared in more than 300 movies, beginning as a child actor in south India. She appeared in her first Bollywood production in 1978. She starred in many hit films, including 1987's Mr. India, in which she played an investigative reporter.

Sridevi's involvement in a film could make it a blockbuster. She commanded top earnings as a result.

In 1997, she married Kapoor, a producer on many of her films. She took a break from making films for many years while she raised her two daughters.

She returned to work in 2012. She appeared in "English Vinglish," in which she played a quiet housewife who decides to learn English to fit in more with her family.

In 2017, she starred in "Mom," playing a woman seeking vengeance for the rape of her stepdaughter.

Over the last few years, Sridevi had been preparing her older daughter, Janhvi Kapoor, for her first Bollywood film. The movie is set for release later this year.

This story is based on an Associated Press report and a VOA report by Anjana Pasricha. Ashley Thompson adapted it for Learning English. Caty Weaver was the editor.

bathtub - n. a large and long container in which people take baths or showers

club - n. a business that provides entertainment (such as music, dancing, or a show)

cremate - v. to burn (the body of a person who has died)

blockbuster - n. something that is very large, expensive, or successful

vengeance - n. the act of doing something to hurt someone because that person did something that hurt you or someone else