Update Required To play the media you will need to either update your browser to a recent version or update your Flash plugin.
By Jonathan Evans
28 April, 2015


Many of India's biggest cities are struggling. They have too many people and not enough places for them to work, live and play. They often lack services, including effective public transportation and recreational areas, like parks.

The number of people living in cities in the fast-growing nation is expected to rise to 814 million by 2050. This kind of sharp growth is known as "mass urbanization." It has happened before only in China.

To deal with the predicted growth, India will build many "smart cities." These cities will have clean water, waste collection and a power center. These are luxuries for many Indians. 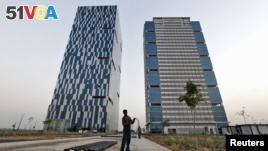 A worker folds the cable of a welding machine in front of two office buildings at the Gujarat International Finance Tec-City (GIFT) at Gandhinagar, in the western Indian state of Gujarat, April 10, 2015.

A year ago, Prime Minister Narendra Modi announced a plan to build 100 smart cities by 2022, at a cost of one trillion dollars. He hopes the construction of the cities will provide jobs for the one million Indians who join the workforce every month.

The first smart city is near Gandhinagar, the capital of the state of Gujarat. It is called Gujarat International Finance Tec-City, or GIFT. The Indian government hopes it will be a model for future Indian cities.

Officials hope to persuade banks and other businesses to open in GIFT. To do that, the government is reducing their taxes and giving them other financial benefits.

The Reuters news agency reported this story. Jonathan Evans wrote it for VOA Learning English. Christopher Jones-Cruise was the editor.

urbanization – n. the process by which towns and cities are formed and become larger as more and more people begin living and working in central areas

luxury – n. something that is helpful or welcome and that is not usually or always available

What is being done to make cities smarter in your country? We want to hear from you. Write to us in the comments section.