Update Required To play the media you will need to either update your browser to a recent version or update your Flash plugin.
By Gregory Stachel
03 November 2022


Kesa Bhai Prajapati works with material from earth called clay to make containers like jugs and vases. Prajapati recently became much happier while making his products.

Prajapati is 68 years old and from the village of Modhera in western India's Gujarat state. He is happier because he has doubled the amount of clay goods he can make compared to a few months ago.

He creates his products on a machine called a potter's wheel. 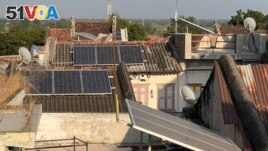 In the past, he was producing less because he had to turn the wheel himself. He could not pay the cost of running an electric motor. The electricity bill was up to $18.19 a month.

Now, however, his machine moves on solar power. Earlier this month, Prajapati's village was declared India's first village to run completely on solar power all the time. The village has around 6,500 people living there who mostly work with clay, clothes, shoes, or on farms.

Prajapati said, "Electricity has helped us to save time and produce more products."

India is the world's third-largest carbon dioxide releaser. But it aims to meet half of its energy demands from renewable sources, such as solar and wind, by 2030. That is an increase over its earlier goal of 40 percent. The government said it met that goal in December 2021.

The project in Modhera was financed by the federal and local governments for nearly $10 million. It involved setting up over 1,300 solar panels on the tops of private and government buildings that were connected to a power plant.

The government buys surplus energy produced from the villagers if they do not use all of the amount that has been given to the household.

Praveen Bhai is 43 years old and works with clothes. With the extra money, he plans to buy a gas connection and stove. Many houses in the village cook food on wood-fired stoves which create smoke.

He said, "I had to teach the kids under the streetlamp. Now they will be able to study inside the house."

Modhera is known for its ancient Sun Temple which honors the sun god. And it is located in Prime Minister Narendra Modi's home state Gujarat. Gujarat will be holding elections later this year.

Modi said earlier this month, "For a self-reliant India of the 21st century, we have to increase such efforts related to our energy needs."

She said, "When we got access to solar power, I bought an electric motor worth 2,000 rupees ($24) to attach to the sewing machine. Now I am able to sew one or two more clothes daily."

source – n. someone or something that provides what is wanted or needed

self-reliant – adj. confident in your own abilities and able to do things for yourself: not needing help from other people

motor – n. a machine that produces motion or power for doing work