Update Required To play the media you will need to either update your browser to a recent version or update your Flash plugin.
By VOA
03 September, 2013

Welcome to As It Is, a daily show from VOA Learning English.

Today, we report on how India has become an important market for developers of solar energy. Hundreds of millions of people in India don't have electricity; solar power could change that, and improve their lives. 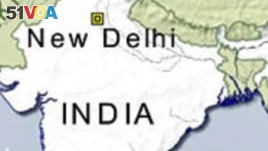 India to Boost Solar Power Generation
Then, we take you for a ride on the first train to travel between the north and south of Nigeria in more than ten years. Africa's most populous nation desperately needs reliable rail service.

India has become an important market for solar power developers. One reason for this is falling prices for the equipment that can make electricity from sunlight. Another reason is government support for the development of solar power.

Thousands of solar panels in the Indian state of Gujarat have been producing electricity for almost a year. These panels make up the largest solar energy park in Asia. More than 20 international companies launched the park a year ago. It now produces 214 megawatts of power every day. 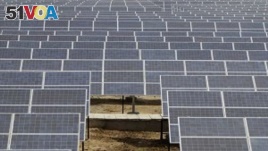 An Indian security guard walks among solar panels at the newly inaugurated solar photovoltaic power plant at Khadoda, in Sabarkantha district, about 90 kilometers (56 miles) from Ahmadabad, India, Friday, June 10, 2011
Other solar parks have been built in India. But the nation produced almost no solar energy three years ago.

Amit Kumar works at The Energy and Resources Institute in New Delhi. He says falling prices for solar energy equipment have made it economically possible to capture and use the power of the sun.

"Prices are also continuously coming down, and we feel that again the target that cost of solar power should be equivalent to conventional power, we feel that it could probably be achieved by 2017 itself."

Fossil fuels like coal and oil now produce most of India's power. But the government has set a goal of producing 20,000 megawatts of solar power by 2022.

India is home to almost 400 million people who do not have access to electricity. Most live in rural areas. But even cities experience power shortages.

Some businesses are building large solar parks because the government has promised to buy the power they produce. Others are producing small solar systems for villages. They include companies like SELCO India, based in Bangalore. Its solar systems help power low-power devices like lighting, television receivers, mobile chargers and sewing machines. 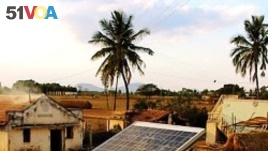 "You have a sewing machine which can be powered by electricity, but unfortunately what happens in most of these areas where there is no electricity, the entrepreneur is forced to use manual, manually-operated machines. So when we talk about powering it on solar, so what happens is instead of producing 10 or 20 saris, the person produces say about 80 or 100 saris."

India has warm weather and sunshine for much of the year. Experts say the country could become an important market for solar power if government policies continue to support it.

For the first time in 10 years, Nigeria has a train service that links the north and south of the country. VOA's Heather Murdock took the 1,100-kilometer trip from Lagos in the south to the northern city of Kano.

Onka Dekker has her report.

The train leaves Lagos -- Nigeria's largest city -- every Friday at about 12 o'clock. Three hours earlier, the line to buy train tickets is already long. A one-way ticket to Kano costs between $12 and $30. 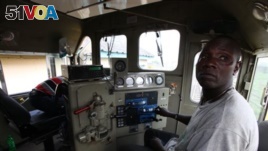 A train driver is seen on an Ooni of Ife train to Kano, in Lagos, Nigeria.
When the trip begins, passengers in every part of the train appear excited to see Nigeria by train.

Passenger Aisha Muhammad Shuaib says taking the train costs less than a bus ride and is much safer than the roads.

"The roads, the roads are bad, sometimes armed robbers. That's why I'm fearing the road, because it happens to me. When I was coming from Kano to Lagos I take the same bus with armed robbers. You can imagine! Eight armed robbers in the bus, we were heading to Lagos." 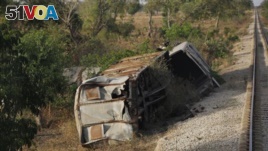 A derailed car of a train is seen on Lagos to Kano route in Nigeria.
As the train leaves Lagos, passengers watch the countryside passing by. Most passengers are hot. There is no air conditioning, except in the first-class car or private rooms. When the train stops, passengers hurry to buy soft drinks, water, nuts and fruit at the railroad station.

No railroad worker announces that the train is prepared to leave and there are no steps into the train cars. So when the train starts moving, passengers must jump on quickly. The train usually moves much slower than the promised top speed of 50 kilometers an hour.

On the second day of the trip, the train cars are so full that luggage and other belongings fill the washrooms.

The train reaches Kaduna State at about 6 o'clock. This is the time it was supposed to arrive in Kano, about 200 kilometers farther north. 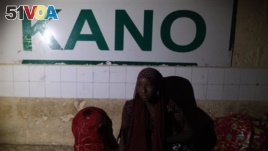 A passenger waits for an Ooni of Ife train to arrive in Kano, Nigeria.
A security officer warns passengers they are now in an area known for violence.

"Kano is one of the most security-dangerous areas that we need to be on our toes. We are on our optimum, optimum vigilance. As we are going to Kano watch out to every passenger that come in."

Early the next morning, the train finally enters the Kano train station. Local officials say the city is at the center of the Boko Haram rebellion against the central government. The trip from Lagos to Kano took 37 and ?hours. Tired passengers leave the train and move quickly away from the station. On the train, workers now prepare for the return trip down the length of Nigeria.

And that's "As It Is," our daily show from VOA Learning English.

We want to hear what you want to hear about on "As It Is." So let us know -- send an email to special@voanews.com.

I'm Christopher Cruise, and that's "As It Is" from VOA Learning English, from The Voice of America.
Related Articles
go top