India to Bring Light and Heat with Solar Energy

Update Required To play the media you will need to either update your browser to a recent version or update your Flash plugin.
By VOA
12 October, 2015


Hundreds of villages in rural India are using clean energy powered by the sun.

This month, 61 households in the village of Baripatha in eastern India were given two solar lamps. Villagers had been using kerosene lamps at night. Kerosene produces pollution and can lead to fires. 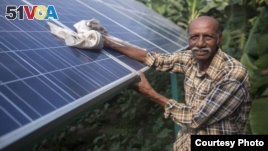 Officials say they want to slow the amount of greenhouse gas emissions. India is now the third-largest producer of this gas. The gas contributes to climate change.

Arunabha Ghosh is the head of the Council on Energy, Environment and Water, a policy research group in New Delhi.

He says "in terms of the share of electricity capacity that Germany achieved through renewables, that transition took about 22 years for Germany. In India's case, which is a much poorer economy, India is planning to have a similar shift towards renewable energy and non-fossil energy" within 15 years.

India's goal may be helped by the decreased cost of developing solar energy. The government says it wants investors to spend $100 billion over seven years in solar power. It is reducing taxes for some solar-related investments. And it is permitting non-Indians to invest.

This week, Germany said it would spend more than $2 billion on solar projects in India. SunEdison, an American renewable-energy company, says it wants to invest $15 billion. SoftBank, a Japanese company, has announced it will partner with companies in India and Taiwan to spend up to $20 billion on solar energy projects. Trina Solar, a Chinese company, plans to spend $500 million to make solar panels.

Some people in India are worried that there is not enough land for some of these projects. Many of the projects need large plots of land.

Inderpreet Wadhwa created a company called Azure Power. It was one of the earliest investors in solar projects. He said most of them are being built in dry areas of the country, on land that cannot be farmed.

"You are not displacing any alternative use of land," he said, "especially if you are building in remote areas in Rajasthan for example."

Meanwhile, India continues to dig for coal to provide energy. It says it hopes to double production in five years. India says it needs such plants. It says one quarter of its 1.2 billion people still do not have electricity. Some Indian towns and cities still do not have reliable electricity for their people.

Environmental activists warn that the use of the new coal-fueled power plants means that India will continue to increase the amount of carbon pollution it produces for many years.

But environmental researcher Arunabha Ghosh notes that "people don't seem to recognize that it is not a question of will more coal be built or not. It is a question of how (many coal-fueled power centers are) not going to be built because of these aggressive (solar) targets. We are going from about eight to 13 percent of renewable energy in mid-century to 30 percent by 2030."

China and the United States have set deadlines to reduce carbon they send into the air. But India has not. It has only set a goal of slowing the increase of pollution it creates, not reducing the total.

Indian officials note that the amount of pollution the country creates is far lower compared with countries like the United States.

emissions – n. something sent out or given off

capacity – n. the largest amount that a factory or company can produce or manage

shift – n. a change in how something is done or how people think about something

remote – adj. far away from other people, houses or cities

Do you have a suggestion or solution for increasing light and heat to people who don't have any? We want to hear your opinion on this story. Write to us in the Comments section or on 51VOA.COM.