India's home ministry said Wednesday that Rohingya refugees in the capital, New Delhi would be detained and then expelled from the country. The announcement conflicts with an earlier statement promising shelter and security to the refugees from Myanmar.

Hardeep Singh Puri is India's federal minister for housing and urban affairs. Earlier on Wednesday, he said on Twitter that Rohingya refugees would be given shelter in western Delhi's Bakkarwala area. He added they would be provided with basic living support and police protection.

But, just hours after Puri's tweets, the federal home ministry said in a statement that "Rohingya illegal foreigners" would remain held at a place in the city's south as officials worked to deport them. 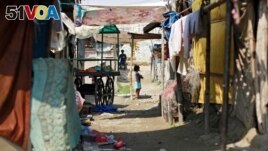 FILE - A girl from the Rohingya community stands outside a shop in a camp in New Delhi, India October 4, 2018. (REUTERS/Adnan Abidi)

"Illegal foreigners are to be kept in the detention center till their deportation as per law," the home ministry said in a statement.

"The Government of Delhi has not declared the present location as a detention center. They have been directed to do the same immediately."

Hundreds of thousands of Rohingya have fled Myanmar in the last several years to escape violent government attacks on their villages. Most of the refugees are in Bangladesh, which borders Myanmar.

As of early this year, 17,000 Rohingya found refuge in India. About 1,100 are living in Delhi. Some have found work, mainly as laborers, rickshaw operators and by selling goods at small stands on the streets, Rohingya rights activist Ali Johar said.

Johar noted that some 2,000 Rohingya had left for Bangladesh this year, amid fears of being deported from India. "Most of the Rohingya in Delhi now live in rented accommodation, where they feel safe, or in settlements," said Johar, who moved to India about 10 years ago and lives with his family.

Speaking to Reuters before the home ministry's statement, Johar expressed concern that the new facilities could be used to imprison the refugees.

"If it turns out to be a detention camp, that will be a nightmare for us," he said.

Krishna N. Das reported this story for Reuters. Hai Do adapted the story for Learning English.

rickshaw - n. a small vehicle with two wheels that is pulled on foot or by a bicycle

rent - v. to pay money to use something

accommodation - n. a place to sleep or stay