Update Required To play the media you will need to either update your browser to a recent version or update your Flash plugin.
By Susan Shand
07 March, 2018


This year's top award in architecture goes to Balkrishna Doshi. This is the first time an Indian has won in the 40-year history of the award, known as the Pritzker Prize. Some compare the award to the Nobel Prize.

Doshi has been an architect, city planner, and educator for 70 years. In contrast to other Pritzker winners, Doshi works almost only in his home country. In Ahmedabad, Doshi's designs can be seen in the concrete Life Insurance Corporation Housing buildings to the flowing curves of the Amdavad ni Gufa art gallery.

But he is best known for designing low-cost housing. The Aranya project in Indore is home to more than 80,000 people, many of them poor. It includes a system of houses, courtyards, and pathways.

Doshi says the housing can change how home owners see their world. "Now, their life has been changed. They feel hopeful," he said. "They have ownership of something."

Doshi said his life's work has been to help "the have-nots, the people who have nothing."

He called the prize an honor both for himself and for India. 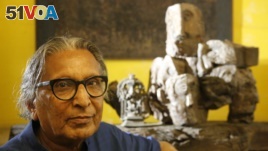 Doshi was born in 1927 in the city of Pune. He studied architecture in Mumbai and later worked under the architect known as Le Corbusier. Doshi was the first director of Ahmedabad's School of Architecture and Planning, now known as CEPT University.

He founded his own company in 1956, and lives and works in Ahmedabad.

The Hyatt Foundation, which sponsors the Pritzker Prize, called Doshi's work "poetic and functional." It noted that Doshi's buildings both respect eastern culture and improve the quality of life in India.

"My work is the story of my life," Doshi said in the award announcement. He said he was always moving forward, changing and searching, to look beyond architecture to look only at life.

Susan Shand adapted this story from an AP reports. Kelly Jean Kelly was the editor.

functional – adj. designed to have a practical use