Update Required To play the media you will need to either update your browser to a recent version or update your Flash plugin.
By John Russell
30 April, 2019


On Tuesday, the Indian Army found mysterious large footprints in the snow. The military group, on an outing in Nepal, took pictures and later put them on Twitter. Their conclusion: the footprints belong to the Yeti, also known as the "abominable snowman."

Most experts in the scientific community say the Yeti is a myth, an imaginary story.

The man-like creature is part of Nepali tradition and is said to live high in the Himalayan mountains. 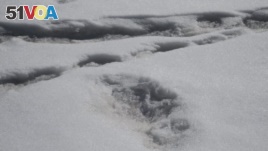 The tweet did not explain how a mythical beast could leave footprints.

The Indian army's Twitter post has drawn criticism by some on social media. One user, for example, put an image of a pothole in Bombay and noted that Yeti footprints could be found there.

Other users noted that the supposed Yeti tracks appeared to be a single foot line. One user suggested the Yeti may have been riding a kind of strange bicycle.

Mount Makalu and the Yeti

Mount Makalu, where the Indian Army took the photographs, is one of the highest mountains in the world. It stands near the Makalu-Barun valley, an area very far from human population.

The area has already been explored by researchers looking for the Yeti.

Daniel C. Taylor is one of them. He wrote a book on the mystery of the Yeti. Taylor noted that the footprints likely came from a bear.

Taylor told the Reuters news agency that if the footprints came from "an animal or a single animal, it's the size of a dinosaur."

Taylor added, "One needs to really confirm those measurements of the footprint size because we know for sure that there are no dinosaurs living in the Barun valley."

Since the 1920s, tales of a wild beast have captured the imagination of climbers in Nepal and around the world.

In 2008, Japanese climbers returning from a mountain in western Nepal told Reuters they had seen footprints, which they thought belonged to the Yeti.

Although they carried cameras, video equipment and telescopes, they had not seen or taken any photographs of the creature.

In 2017, a group of international researchers studied multiple Yeti samples. The researchers concluded the samples belonged to bears.

Devjyot Ghoshal reported on this story for Reuters. John Russell adapted it with the use of other sources for Learning English. Caty Weaver was the editor.

beast – n. a wild animal that is large, dangerous, or unusual

pothole – n. a deep, round hole in a road or some other surface (such as the bottom of a river) — sometimes used figuratively