Update Required To play the media you will need to either update your browser to a recent version or update your Flash plugin.
By Ashley Thompson
14 June, 2018

A chess champion from India has announced she will not take part in a competition next month in Iran.

Soumya Swaminathan is a 29-year-old grand master. She is the number-five ranked chess player in her country. 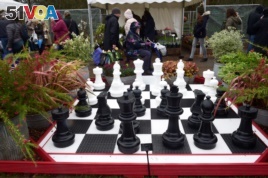 Chess set pieces are displayed along with flowers on a stand at the RHS Cardiff Flower Show, Cardiff, Wales, April 15, 2018.

She said this week she would not play in the upcoming tournament because of Iran's law requiring women to wear headscarves. She called the law a violation of her human rights.

Swaminathan wrote on Facebook this week, "It seems that under the present circumstances, the only way for me to protect my rights is to not go to Iran."

Swaminathan was to be a part of the Indian team in the Asian Team Chess Competition. The event begins July 26 in Hamadan, Iran.

Iran and Saudi Arabia are two countries that by law require women to wear headscarves in public. However, the practice is common in many Muslim-majority nations.

In February, Iranian police arrested 29 people following a series of protests in which women removed their headscarves in public.

Many people on social media supported Swaminathan's decision. One Twitter user wrote, "Religious dress codes should not be imposed on players."

Another said she was proud of Swaminathan for "resisting...gender inequality."

Swaminathan is not the only female grandmaster who opposes Iran's laws. In October, Iranian national Dorsa Derakhshani was barred from playing in the country -- or for the national team -- after she played in a tournament in Gibraltar without wearing her headscarf.

Derakhshani later moved to the United States and joined the U.S. national team.

She said, "It feels good and ... peaceful to play for a federation where I am welcomed and supported."

VOA News reported this story. Ashley Thompson adapted it for Learning English. Hai Do was the editor.

chess - n. a game for two players in which each player moves 16 pieces across a board and tries to place the opponent's king in a position from which it cannot escape

grand master - n. an expert player in chess who has scored very high in international competition

headscarf - n. a piece of cloth worn over a woman's or girl's head