Update Required To play the media you will need to either update your browser to a recent version or update your Flash plugin.
By Caty Weaver
29 September, 2017


More and more people in America are celebrating the Indian holiday Diwali.

Diwali is Hindi for "row of lights." It is the most important holiday in India. Although it began as a Hindu observance, almost everyone in the country celebrates the Festival of Lights.

Many people around the world are beginning to as well.

The United States is one of the places where the festival is becoming more common. Diwali celebrations can now be found at American landmarks like Disneyland in California and New York City's Times Square. They are also held in many parks and museums.

Neeta Bhasin established the Times Square event. She said Indian immigrants have found great success in America. But, she said, many Americans still do not know much about India. So, she decided to act.

"I felt it's about time that we should take India to mainstream America and showcase India's rich culture, heritage, arts and diversity to the world," she said. "And I couldn't find a better place than the center of the universe: Times Square."

Bhasin came to the United States from India 40 years ago. She is president of ASB Communications, the marketing firm behind Diwali at Times Square. Tens of thousands of people attend the event, now in its fourth year.

The 2017 celebration takes place October 7. There will be dance performances, Bollywood singers, a marketplace for Indian food and goods, and, of course, a lighting ceremony. 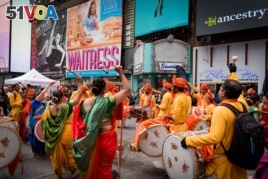 More Diwali celebrations in the U.S.

In India, Diwali is a five-day harvest festival held just before the Hindu New Year. The exact dates change from year to year but Diwali is always in the fall. Celebrations include lighting oil lamps or candles called diyas. The lights represent, in Bhasin's words, "a victory of knowledge over ignorance, light over darkness, good over evil."

A Diwali celebration will light up Disney California Adventure Park in Anaheim this year. Visitors can watch performances of traditional Indian dances and take part in a Bollywood dance party. The event is part of a Festival of Holidays program at the theme park to show cultural traditions from around the world. The program takes place November 10th through January 7th.

San Antonio, Texas, also holds a Diwali celebration. And it is one of the nation's largest, with more than 15,000 people in attendance each year. The 2017 festival takes place November 4 at La Villita, a historic arts village. It will be the city's ninth Diwali celebration. Visitors can enjoy Indian dance, food, and fireworks. Organizers also plan to float hundreds of lighted candles in the San Antonio River, along the city's famous River Walk.

Caty Weaver wrote this story for Learning English with information from the Associated Press. Hai Do was the editor.

row - n. a straight line of people or things that are next to each other

festival - n. a special time or event when people gather to celebrate something

landmark - n. an object or structure on land that is easy to see and recognize

mainstream - n. the thoughts, beliefs, and choices that are accepted by the largest number of people

ignorance - n. a lack of knowledge, understanding, or education