Update Required To play the media you will need to either update your browser to a recent version or update your Flash plugin.
By John Russell
17 September, 2017


Darshana Kapoor walked near the riverbank after swimming in the Ganges River in Haridwar town. It is one of the most important places for the Hindu religious group in India.

But, the ritual bath was not a good experience for Kapoor.

"My faith [strong belief] brought me here, but when I saw garbage floating in the river, I felt so bad. I had to scrub myself," she said. 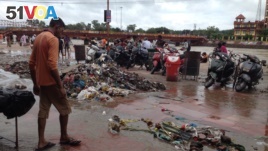 A pile of garbage lies on the riverbank along the Ganges riverfront known as "Har ki Pauri," the most sacred spot in the Hindu holy town of Haridwar where devotees throng. (A. Pasricha/VOA)

Kapoor is not alone in her opinion. The Central Pollution Board has said that the water of the Ganges River at Haridwar is not fit for bathing.

The river's condition disappoints thousands of people who come to the town. They were hoping to see results from a $3-billion cleanup project launched by Prime Minister Narendra Modi.

The Ganges River starts in the Himalayan Mountains, but those cold, clean waters become polluted as they travel through the plains of north India. Garbage, untreated sewage, and industrial waste are the main causes of the damage.

It is a big concern because the river provides water for 400 million people.

For over 30 years, the government has been trying to clean up the river.

After becoming prime minister in 2014, Modi admitted the cleanup failure and promised to succeed where earlier governments had not. But three years after his promise, environmental activists say that the river is still dying.

The National Green Tribunal is India's main environmental court. In July, it criticized the government, saying "the status of the river Ganga has not improved in terms of quality and it continues to be a serious environmental issue."

However, environmental activists point out that court orders do not always have an effect.

M.C. Mehta is an environmentalist.

"The basic problem in this country and this case also is compliance," said Mehta. "No monitoring mechanism is there, so it is very difficult to say how much directions have been complied with."

The main challenge is the slow pace of setting up treatment centers. About three-quarters of the sewage generated in the towns and cities in the northern plains flows untreated into the Ganges.

Ganesh Singh owns a shop along the riverbank in Haridwar. He said there have been efforts to educate the people about not dumping waste into the river.

"Many polythene bags, bottles, garbage used to be thrown into the river earlier. It is better now," he said. He was happy the river helps bring in more tourists.

However, just a few meters down from his shop, piles of garbage dumped along the riverbank were getting slowly washed into the water with the rain.

Mehta worries that leaders do not care enough about the issue.

"I am not talking about this leadership – it is for the last 32 years the same thing is going on," he said. "It should not be just lip service that we are the sons and daughters of mother Ganga, without doing something."

This month, Modi gave responsibility for the Ganges cleanup campaign to a top cabinet minister, Nitin Gadkari. Gadkari is known for completing tasks.

Devotees and environmentalists are hoping that will happen.

Anjana Pasricha reported on this story for VOA News. John Russell adapted it for Learning English. Mario Ritter was the editor.

ritual – adj. done as part of a ceremony or ritual

bath – n. the act of washing the body usually by sitting or lying in a container filled with water

scrub – v. to rub (something) hard with a rough object or substance and often with soap in order to clean it

monitoring – n. the act of watching, observing, listening to, or checking (something) for a special purpose over a period of time

devotee – n. a person who has very strong loyalty to a particular religion or religious figure