Update Required To play the media you will need to either update your browser to a recent version or update your Flash plugin.
By George Grow
22 January, 2015


Indonesia is facing widespread international criticism after executing six people, including five foreigners. All six were found guilty of violating Indonesian drug laws. Other countries had urged Indonesian officials to cancel the death sentences. After the executions were carried out, two of the countries ordered their ambassadors in Indonesia to return home.

Brazil and the Netherlands withdrew their ambassadors from Jakarta after Indonesia rejected their appeals not to execute their citizens.

A Brazilian and Dutch citizen were among six people who received the death sentence for violating Indonesian drug laws. The other criminals were from Malawi, Nigeria, Vietnam and Indonesia. All six were shot to death on Sunday. 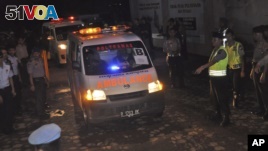 Amnesty International has criticized the executions as what it called a "retrograde step for human rights" in Indonesia.

Indonesia began executing some criminals in 2013 after five years without executing anyone. No prisoners were put to death last year.

But two Australians could be executed soon. They were sentenced to death in 2006 after being found guilty of leading a drug group known as the Bali Nine. Members of the Bali Nine attempted to bring more than eight kilograms of heroin into Indonesia nearly 10 years ago.

Foreign Minister Julie Bishop refused to say whether her government would order home its ambassador to Indonesia if the two Australians are executed.

Joko Widodo became Indonesia's president three months ago. He has said there will be no easing of the country's strong position against drug dealers.

Indonesia's top law enforcement official, Muhammad Prasetyo, has also defended the executions of those who were sentenced for serious drug crimes. He says the death sentence is necessary to protect the country against drugs.

He says Indonesia must be strong and never compromise with anyone involved in trafficking illegal drugs.

sentence - n. punishment for a crime or crimes

step - n. one in a series of actions designed to reach a goal

compromise - n. the settlement of an argument where each side agrees to accept less than first demanded