Update Required To play the media you will need to either update your browser to a recent version or update your Flash plugin.
By Jim Dresbach
11 August, 2016


Last year, some of the biggest fires in recent history burned through parts of Indonesia.

The fires sent huge clouds of smoke across Indonesia and its neighbors. They also produced large amounts of carbon dioxide. Studies have linked increasing carbon dioxide levels to rising temperatures in Earth's atmosphere.

For years, Indonesian farmers and businesses have cleared land for agriculture by setting fire to fields and undeveloped areas. This year's fire season is to begin soon. But measures to limit the burning are now in place. 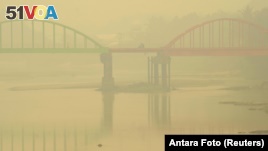 A resident rides a motorcycle on the haze-shrouded Betrix bridge in Sarolangun, on Indonesia's Jambi province, Oct. 7, 2015.

One of Indonesia's top exports and most popular agricultural products is palm oil. It is used in snack foods and cosmetics.

Palm trees grow mainly in what was once peatland – wet areas where dead organic material is plentiful. Peatland was dried for agriculture in the quickest way possible – illegal draining and burning of the land.

This kind of farming was responsible for some of the worst fires in history. The fires created clouds so large they spread into neighboring countries. Such fires can release more carbon dioxide than the amount produced in the entire United States.

Woro Supartinah directs The Network for Riau Forest Rescue, a non-governmental organization on the island of Sumatra. Her group studies forest fires and their destruction through satellite information and reports by members.

"Dried peatland has become the gasoline for any triggers for the fires...Riau province has lost around five million hectares of natural forest. Now, currently we only have 1.6 million (Hectares) of natural forest from seven million that we had in the late (19)80s."

This year, scientists are blaming the weather event called El Nino for reduced rainfall and drier than normal conditions across Indonesia. But for the first time, policing efforts have stopped the fires on large farms, known as plantations.

Edwar Sanger is the head of the National Disaster Management Authority in Riau. He said his government agency is prepared to control the burning.

"...We have already made a commitment that what had happened in the past years will not happen again."

Communities across Indonesia have developed different ways to prevent and fight fires. Some are blocking waterways once used to drain water from the land. This helps to reduce the risk of fire.

Other communities have their own fire departments or firefighters. And some farmers have stopped growing palm trees and, instead, are planting different crops.

With the dangerous fire season soon to begin, these efforts and others will be put to the test.

David Boyle and Laura Villadiego wrote this story for VOANews. Jim Dresbach adapted it for Learning English. Georg Grow was the editor.

cosmetics – n. a beauty product; a substance (such as a cream, lotion, or powder) that you put on your face or body to improve your appearance

drain - v. to remove (liquid) from something by letting it flow away or out

gasoline - n. a liquid made from petroleum and used especially as a fuel for engines

plantation – n. a large area of land especially in a hot part of the world where crops (such as cotton) are grown