Update Required To play the media you will need to either update your browser to a recent version or update your Flash plugin.
By Jim Dresbach
19 September, 2016


Researchers say a thick haze caused by man-made forest fires in Indonesia is the likely cause of more than 100,000 deaths.

The pollution also has been blamed for deaths in nearby Malaysia and Singapore. The haze has hurt relations between Indonesia and its neighbors.

The fires in Indonesia last year were the worst since 1997. 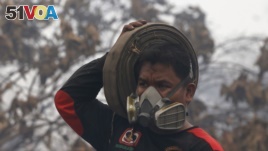 An Indonesian firefighter carries a fire hose as he walks after fighting burning palm oil trees at a palm oil plantation at Jebus village in Muaro Jambi, on the Indonesian island of Sumatra, September 16, 2015.

Each year, fires are set in Indonesia's forests and in peat areas. Peat is a collection of dead plants. Burning is a fast and low-cost way to clear peat areas and land for palm oil and pulpwood production.

Rajasekhar Bals is an environmental engineering expert at the National University of Singapore. He told the Associated Press the study could be a "wake-up call" for Indonesia. He added that the country should take action to stop the fires. Bals said there must be cooperation throughout the area to deal with public health problems caused by the fires.

The activist group, Greenpeace, said the study is "groundbreaking." The organization known for protecting the environment also cautioned that the new numbers represent a "conservative estimate."

The study did not include the impact the haze has on children and future generations.

Nursyam Ibrahim is from the Indonesian Medical Association's West Kalimantan chapter. He told the media how Indonesian health workers have been overworked by the haze.

The study is to be published in the journal Environmental Research Letters.

haze – n. dust, smoke, or mist that has filled the air so that you cannot see clearly

peat – n. a dark material made of decaying plants that is burned for heat or added to garden soil

palm oil – n. oil that is obtained from the fruit of some palm trees and used in cooking and in making soap and other products

wake-up call – n. something that makes you fully understand a problem, danger or need