Update Required To play the media you will need to either update your browser to a recent version or update your Flash plugin.
By Gregory Stachel
03 October 2022


Indonesian officials have removed police officers and investigated others responsible for firing tear gas that set off a crush, killing at least 125 people at a soccer game. The victims included 17 children.

The game took place in the Southeast Asian country's Malang city. It was attended only by hometown Arema FC fans. The organizer had banned supporters of the visiting team Persebaya Surabaya because of Indonesia's history of violent soccer rivalries.

Witnesses said fans ran onto the field after Arema lost the game 3-2. They were angry that the team had its first loss at home against Persebaya after 23 years. Some of the 42,000 Arema fans threw bottles and other objects at players and soccer officials. At least five police vehicles were turned over and set on fire outside the stadium. 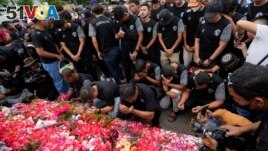 Players and officials of the soccer club Arema FC pray outside the Kanjuruhan Stadium where many fans lost their lives in a stampede Saturday night in Malang, Indonesia, Oct. 3, 2022. (AP Photo/Achmad Ibrahim)

But most of the deaths happened when riot police, trying to stop the violence, fired tear gas, including toward the seats inside the stadium. That set off the disastrous crush of fans trying to flee. Most of the 125 people who died were trampled upon or died because they could not breathe. Two police officers were among the dead. Overall, 323 people were injured in the crush, some of them still in serious condition.

A National Police spokesman said the Malang police chief had been removed along with nine officers. He said 18 officers responsible for firing tear gas were being investigated.

Police are still questioning witnesses and looking at videos from 32 security cameras inside and outside the stadium. They are also looking at mobile phones owned by the victims to identify suspected vandals.

On Monday, Arema players and officials laid flowers for the victims in front of the stadium. Head coach Javier Roca said, "We came here as a team asking forgiveness from the families impacted by this tragedy, those who lost their loves ones or the ones still being treated in the hospital." And the team president said he is ready to take full responsibility for the tragedy.

Indonesia's President Joko Widodo ordered the soccer organization suspended until safety is looked at and security is increased. Indonesia's soccer group has also banned Arema from holding games at its stadium for the rest of the season.

Saturday's game was among the world's worst crowd disasters at sporting events. In 1996, over 80 died and more than 100 were injured at a World Cup qualifier between Guatemala and Costa Rica in Guatemala City. More than 40 people were crushed to death during a soccer match at Ellis Park in Johannesburg, South Africa in April 2001.

In February 2012, 74 people were killed and more than 500 injured after a match between rivals al-Masry and al-Ahly when thousands of al-Masry fans invaded the field and attacked visiting supporters. The Egyptian soccer organization was suspended for two years as a result.

Agoes Basoeki and Edna Tarigan reported this story for The Associated Press. Gregory Stachel adapted it for VOA Learning English.

rivalry – n. a state or situation in which people or groups are competing with each other

stadium --– n. a very large usually roofless building that has a large open area surrounded by many rows of seats and that is used for sports events or concerts.

trample – v. to cause damage or pain by walking or stepping heavily on something or someone

vandal – n. a person who deliberately destroys or damages property