Update Required To play the media you will need to either update your browser to a recent version or update your Flash plugin.
By Bryan Lynn
11 October 2021


Indonesian officials are seeking to protect a small environment on Java island that is home to an endangered population of gibbons.

Also known as the silvery gibbon, the primate is only found on Java, Indonesia's most populous island. 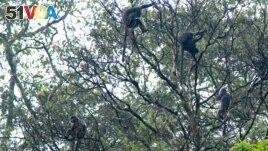 The animals help keep forest areas healthy by spreading seeds around the area. But conservation groups say the gibbons' habitat is increasingly under threat because of climate change and human activities.

The local group SwaraOwa says it observes a population of about 400 gibbons living in a 73-kilometer protected area in the Petungkriyono Forest in central Java.

Researcher Arif Setiawan said as many as 70 groups are often seen in the forest, compared to about 50 in 2012. But he warned that their habitat is still under threat. "The real threat now is the integrity of the forest itself because of the increasing number of human activities," he said.

SwaraOwa and the government hold meetings with members of the local community each month in an effort to raise awareness of the issue. They have also posted signs in the area stating that hunting and logging are not permitted in the forest.

In one project, officials work with local village chiefs to produce shade-grown coffee as a business. This kind of growing can be done without harming forest land.

SwaraOwa also operates nature tours, including overnight visits, for visitors coming to the area. Those efforts aim to provide a way for locals to earn income without harming the environment.

The more difficult issue to deal with is climate change. "It is still raining when it is supposed to be the dry season and that will eventually impact the vegetation," said local forestry official Untoro Tri Kurniawan.

"Instead of fruiting season, leaves grow," he said. "So, the flower that is supposed to become fruit would fall and eventually impact the animals in Petungkriyono," he added.

conservation – n. the act of keeping something safe from harm or from being damaged or destroyed

integrity – n. the state of being whole and undivided

tour – n. a visit to and around a place, area or country

vegetation – n. plants and trees that grow in a given area