Update Required To play the media you will need to either update your browser to a recent version or update your Flash plugin.
By Bryan Lynn
22 April 2021


Indonesian navy ships searched Thursday for a submarine that went missing during training in the Indian Ocean. Officials said 53 crew members were on the boat when it disappeared Wednesday about 96 kilometers north of the island of Bali.

The navy believes the submarine may have sunk too low in the sea for its control systems to operate. The deeper the submarine sinks, the harder it will be to rescue. Officials estimated the sub's oxygen supply would run out early Saturday. 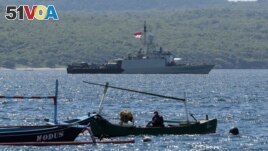 The submarine crew was taking part in training activities Wednesday but failed to report to a planned meeting.

The military said more than 20 navy ships, two submarines and five aircraft were searching the area. A ship designed to map underwater areas and identify objects was also expected to take part. Officials said the operation was helped by calm seas.

Indonesian President Joko Widodo said he had ordered military chiefs to deploy all necessary forces "to find and rescue the submarine crew." Indonesia's navy chief, Admiral Yudo Margono, told reporters: "Hopefully we can rescue them before the oxygen has run out."

Officials reported the smell of fuel in the search area. But they said they do not know if that information is linked to the submarine.

The navy believes the submarine sank 600 to 700 meters, much deeper than its estimated collapse depth. The navy said the submarine might have lost power in a dive, disabling emergency systems.

Earlier, a navy spokesman told Indonesia's Kompas TV that the submarine's electrical system is only designed to operate at a depth of 250 to 500 meters. "Anything more than that can be pretty fatal," the spokesman said.

Ahn Guk-hyeon is with South Korea's Daewoo Shipbuilding and Marine Engineering. The company provided major improvements to the submarine from 2009 to 2012. He said pressure would likely collapse the submarine if it went deeper than 200 meters. He said his company had rebuilt a lot of the structures inside the submarine, but he lacked information about its current condition.

Navy chief Yudo said the submarine had been cleared for use and was in good condition. It was built in Germany in 1977 and has been in service in Indonesia since 1981.

The Associated Press and Reuters reported on this story. Bryan Lynn adapted the reports for VOA Learning English. Caty Weaver was the editor.

pretty – adv. quite, but not extremely