Indonesia Strikes Down Plans for Development in Rainforest

Update Required To play the media you will need to either update your browser to a recent version or update your Flash plugin.
By Christopher Jones-Cruise
20 September, 2016


Indonesia's Leuser Ecosystem is one of the few places where tigers, orangutans, elephants and rhinoceros all live in the wild.

But there has been talk of possible development of the area for geothermal energy -- heat that comes from the Earth.

Wildlife activists are worried about the plan. 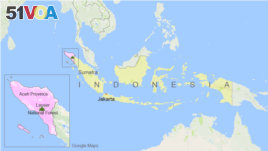 Rudi Putra is an adviser at the Leuser Conservation Forum.

He asked, "Why do they want to build it inside Aceh's best remaining forest?" He believes that if the plan is approved, the area "will lose many, many animals."

The Leuser ecosystem is in Aceh, Indonesia's westernmost province. Last month, the provincial governor asked the central government to change zoning laws for 8,000 hectares of the ecosystem to permit geothermal exploration.

Under the plan, a Turkish company would explore part of the 800,000 hectare Gunnung Leuser National Park. The United Nations' Educational, Scientific and Cultural Organization (UNESCO) has declared the park a World Heritage site.

The re-zoning request was structured to help Indonesian President Joko Widodo. He has promised to add 35,000 Megawatts (MW) of electricity to Indonesia's energy grid by 2020. The plan is designed to increase renewable energy production.

But environmentalists worry that such a development would start a series of events leading to Leuser's collapse. Once the destruction is started, they say, officials would be powerless to stop it.

"Right now it is geothermal, but what's next? Even now they can't protect Leuser," she said.

Federal laws for protecting wildlife are in place. But in recent years, illegal development and logging has been a problem. Some observers say the ecosystem is shrinking by about 5,500 hectares a year.

In Sumatra, logging and land development for farming has destroyed almost one fourth of the forests since 2000.

The environmental group Mongabay says the ministry denied the request. The group said it learned about the decision last week during a meeting of the International Union for Conservation and Natural Resources (IUCN) in Hawaii.

The minister's director for protected areas told Mongabay that the minister received the proposal. But "the result was disagreement with the rezoning, so that's that. [The plan] stops there," he said.

Cory Rogers in Indonesia reported this story for VOANews. Christopher Jones-Cruise adapted the report for Learning English. George Grow was the editor.

ecosystem – n. everything that exists in a particular environment, including living things -- such as plants and animals -- and things that are not living -- such as rocks, soil, sunlight and water

geothermal – adj. of, relating to, or using the natural heat produced inside the Earth

zoning – n. a system of rules used to control where businesses and homes are built in a city or town

site – n. the place where something (such as a building) is, was or will be located

grid – n. a network of electrical wires and equipment that supplies electricity to a large area

log – v. to cut down trees in an area for wood