Update Required To play the media you will need to either update your browser to a recent version or update your Flash plugin.
By Mario Ritter Jr.
19 November 2021


Batik is a traditional Indonesian coloring method used to make designs and drawings, usually on cloth and finished textiles. Batik makers use dyes -- colors added to cloth and other materials – to create the colorful designs.

In central Indonesia, many batik makers are using natural dyes instead of manufactured ones. The natural dyes used come from mangrove forests that grow along the coast. The trees grow in salty water on a complex system of tall roots.

Mangrove forests serve an important purpose. They provide a barrier against destructive ocean waves called tsunamis. They also are important to water life like fish and crabs. And the forests are more effective in capturing carbon dioxide gas, a gas linked to climate change, than rainforests or similar environments.

Erwin Ardli is a mangrove ecologist at Indonesia's Jenderal Soedirman University. He says the natural dyes may not be as bright as manufactured ones. But they are better for the environment. 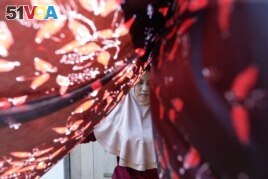 Ardli said, "We've seen the interest for natural dyes increasing, and especially for middle- to upper-class people, they seem proud to wear clothes using these natural dyes rather than synthetic ones."

Iiting Budiarti, who owns an art gallery that shows Batik designs, agreed with Ardli. Budiarti added that objects with natural dyes can cost two or three times more than the synthetic ones.

Forty-eight-year-old Sodikin is a batik maker. He uses only one name. Over the past four years, he and his group of batik makers have changed from using chemical materials for dyes to mangrove-based products. The change has reduced their costs and helped the environment.

Harvesting involves gathering a handful of what looks like string beans -- seeds within a covering. Sodikin then takes the mangrove fruit home to make natural dye from them.

"We use natural materials so as to preserve the mangrove forest at the same time," Sodikin said, as he processed dried fruits before boiling them to extract the color for use as a dye.

"We do not cut down the trees," he added, "and we only take fruits or leaves that have fallen."

textile –n. cloth, fabric or similar materials; something made from cloth

synthetic –adj. not natural, manufactured or made by people

preserve –v. to keep in good condition as it was at first

extract –v. to take a substance out of a more complex material using machines, chemicals or heat