Indonesian police have arrested nine people they believe were planning suicide attacks in the capital of Jakarta.

The attacks were allegedly planned for the Christmas and New Year's holidays.

Police say the Islamic militant suspects were linked to two terrorist networks. They say one of the networks was linked to the Islamic State terror group. 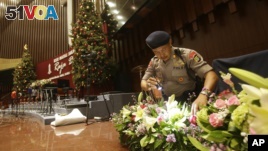 Members of a police bomb squad search for suspicious materials prior to the Christmas Eve Mass at the Messiah Cathedral in Jakarta, Indonesia, Dec. 24, 2014.

A police official said books on jihad were found in the house of one of the suspects, along with bomb-making supplies. There was also a map of Jakarta.

Information about the alleged planning was given to Indonesian police by American and Australian law enforcement agencies.

The arrests took place in five cities on the island of Java.

Police say they are searching for more suspected terrorists.

An Indonesian news website reported that the country's military chief said he plans to deploy more than 150,000 security forces to guard churches and public places during the holidays.

suicide – n. of or relating to killing oneself; used especially to describe something that is done by a person who plans and expects to be killed while doing it

jihad – n. a war fought by Muslims to defend or spread their beliefs