Indonesian Village Becomes Known for Its Creative Use of Technology

Update Required To play the media you will need to either update your browser to a recent version or update your Flash plugin.
By John Russell
14 August 2021


A robot designed for fun by Indonesian villagers and scientists has found a new use during the coronavirus health crisis. It brings food, and hopefully a smile, to people who have COVID-19.

Unlike the complex robots used in Japan and other countries, this Indonesian robot is made of household things objects, like pots and pans and an old television. It is now called the "Delta robot," after the variant of the coronavirus that has spread through Indonesia and the world. 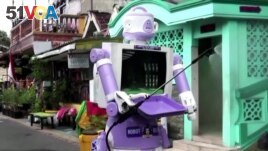 The 'Delta robot' was designed by university lecturers and local residents who built it from old household items. (Reuters Photo)

Aseyanto is a neighborhood leader who heads the "Delta robot" project. "With this new Delta variant and the surging number of COVID-19 cases, I decided to turn the robot into one used for public services such as to spray disinfectant, deliver food and meet the needs of residents who are self-isolating," he said. Disinfectant is a substance that is used to kill harmful germs and bacteria.

The robot's head is made from a rice cooker. It is operated by remote control - a device that is used to control equipment from a distance by using electronic signals. The robot is one of several in the village of Tembok Gede, which has become known for its creative use of technology.

"This Delta robot is very simple..." said Aseyanto. He added that only used materials from the neighborhood were included in the robot.

"For the base, we used a used toy car chassis," said another team member, Benazir Imam Arif Muttaqin.

After moving down the street to the home of a self-isolating villager, the robot's speaker sends out the message "Peace be with you," followed by "A delivery is here. Get well soon." A delivery is something that is taken to a person or place.

The village lies within Surabaya, capital of East Java and Indonesia's second-biggest city. A powerful second wave of coronavirus infections has appeared there over the past month.

Indonesia has become the center of Asia's COVID-19 outbreak. The country has recorded more than 3.68 million infections and more than 108,000 deaths from the virus.

Prasto Wardoyo reported on this story for Reuters. John Russell adapted it for Learning English. Hai Do was the editor.

spray – v. to put a stream of small drops of liquid on (someone or something)

chassis – n. a frame upon which the main parts of an automobile are built

isolate -- v. to put or keep (someone or something) in a place or situation that is separate from others