Update Required To play the media you will need to either update your browser to a recent version or update your Flash plugin.
By Ashley Thompson
09 November, 2019


A watchmaker in Indonesia is using the root of mushrooms as material for making wristwatches.

Mycelium leather, as the material is known, is strong yet movable. It is water-resistant. And, it is considered more environmentally friendly than non-organic material and animal skin.

Erlambang Ajidarma is head of research at Mycotech, in Bandung city. The start-up business supplies mycelium leather to make straps for wristwatches. Ajidarma said his team has been testing several different kinds of mushrooms over the past three years. 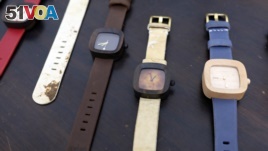 "Finally we found one mushroom with a mycelium that can be made into binding material," he said.

The company grows the mushrooms and then harvests the leather. Then the mushroom is dried and cut up.

The process is complex. It takes around three weeks to make 10 square meters of material. But Ajidarma thinks it is worth it.

It costs less to make mycelium leather than to make oil-based leather-like material. And, the mycelium manufacturing process produces much less carbon dioxide than the manufacturing of leather from cow skin.

Ajidarma's team also uses color-changing substances from leaves, roots and food waste to color the mycelium leather. He says the mushroom leather takes on the color more quickly than leather made from animal skin.

The Indonesian watchmaking company Pala Nusantara cuts and puts the leather together into the straps for its watches.

Nurcholis Irvan recently visited a watch shop in Jakarta. He said he would be "very interested" in buying such a product.

He said, "I would be very interested in a watch made of natural material and plants because I've been allergic to a few that I bought in the past."

wristwatch - n. a watch that you wear on a strap or band around your wrist

strap - n. narrow and usually flat piece of a material that is used for fastening, holding together, or wrapping something

binding - n. a narrow strip of cloth attached along the edge of something

allergic - adj. of or relating to an allergy -- a medical condition that causes someone to become sick after eating, touching, or breathing something that is harmless to most people