Update Required To play the media you will need to either update your browser to a recent version or update your Flash plugin.
By John Russell
07 November 2021


Young Komodo dragons move around in a zoo in the city of Surabaya, Indonesia. Some fight over a female while others look for food in a pond, a small body of water.

The zoo in Indonesia is breeding Komodo dragons in an effort to save the world's largest lizards from dying out. 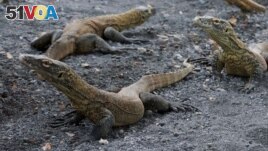 The large lizards are found on the island of Komodo and several neighboring islands in eastern Indonesia.

In September, the International Union for Conservation of Nature put them in its Red List of Threatened Species. The international group noted that the dragons were at an increased risk because of the effects of climate change. It warned that rising temperatures and sea levels due to climate change are expected to reduce the Komodo dragon's living area by at least 30 percent in the next 45 years.

Zoo officials hope that their efforts to save the lizards will draw the attention of world leaders who are gathered in Glasgow, Scotland, to discuss climate change.

Since launching the breeding program, the zoo has built up its Komodo dragon population to 108 adults and 35 young ones. In addition, 40 Komodo dragon eggs are being kept warm for birth.

Zoo keeper Rukin said the temperature and humidity had to be just right for mating.

The hope is that dragons bred in the zoo could be returned to the wild, he said.

"I hope we can breed them well and correctly," Rukin added.

He said he hoped the project would make sure that future generations would still be able to see the dragons in real life, not just in pictures.

Sanjeev Miglani reported on this story for Reuters. John Russell adapted it for Learning English. Susan Shand was the editor.

humidity – n. the amount of moisture in the air