Update Required To play the media you will need to either update your browser to a recent version or update your Flash plugin.
By Dan Friedell
26 February, 2016


Gianni Infantino of Switzerland is the new FIFA president.

Infantino won after the organization voted a second time on Friday in Zurich. 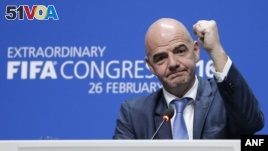 Newly elected FIFA president Gianni Infantino of Switzerland during a press conference after the second election round during the extraordinary FIFA congress in Zurich, Switzerland, Feb. 26, 2016.

FIFA is stuck in a bribery and corruption scandal from last year. Authorities in both Switzerland and the United States are investigating FIFA's finances. They are looking at how money is spent and how World Cup tournaments are awarded.

Infantino finished ahead of three other candidates. He defeated Sheikh Salman of Bahrain 115 to 88 in the second vote.

Infantino will replace Sepp Blatter, another Swiss, who was banned by FIFA's ethics committee late in 2015. He made unauthorized payments to a colleague.

Blatter led the organization since 1998 and served five terms.

Infantino is the general secretary of UEFA, the organization that runs soccer in Europe. He is 45.

Infantino spoke in Spanish, English, French and Italian during his campaign speech, appealing to FIFA members in their own languages. He promised to restore the image and respect of FIFA, saying "everyone in the world will applaud us."

Infantino will serve the remainder of Blatter's final term until May 2019. Then there will be another election.

FIFA did more on Friday than just vote for a new president. It made some anti-corruption reforms. A president can no longer serve more than three four-year terms. There will be independent spending reviews. And the executive committee will now be called the FIFA Council, and reserve more positions for women.

The next World Cup will be held two years from now, in Russia.

Dan Friedell wrote this story for VOA Learning English. The New York Times and the Associated Press provided information used in his report. Kathleen Struck was the editor.

Do you think the new FIFA president will help soccer around the world? Write to us in the Comments Section or on 51VOA.COM.