Update Required To play the media you will need to either update your browser to a recent version or update your Flash plugin.
By Faith Pirlo
14 October 2022


Hello! This week on Ask a Teacher, we will answer a question from Ray in Hong Kong about the difference between two very similar sounding words "afflict" and "inflict."

What is the difference is between "afflict" and "inflict?"
Thank you, 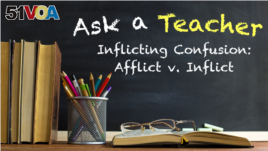 Thank you, Ray, for writing to us!

These two words are often confused. Not only do they sound the same — especially in fast speech — but they also have very similar meanings.

The verb "inflict" takes a direct object. But that direct object is usually the harm that someone is suffering. For example:

Paper cuts always inflict much more pain than you expect.

Here the object of "inflict" is the pain from the paper cut.

We often use a prepositional phrase starting with "on" to tell who is suffering the harm. For example,

The war inflicted suffering on the people.

His job inflicts a lot of pressure on him, as he works very long days.

I do not want to inflict my bad mood on you, so I'm going to stay home.

Let us move on to "afflict!"

The verb, "afflict," also means, "to cause harm to." But the direct object of "afflict" is often the sufferer.

If "afflict" is used in the passive voice, we often use the preposition "with" followed by the cause of the harm.

She was afflicted with depression for many months before asking for help.

My cat was afflicted with extreme sickness after he ate an insect.

Someone or something inflicts harm, pain or damage on something else.

Something, like an illness, afflicts someone. In the case of the passive voice, someone is afflicted with something that causes harm — like an illness.

Please let us know if these explanations have helped you, Ray!

impose – v. to establish; to bring about as if by force

mood – n. the way someone feels at a particular time