Inside Baseball, Other 'Inside' Expressions

Update Required To play the media you will need to either update your browser to a recent version or update your Flash plugin.
By Anna Matteo
17 December 2022


And now Words and Their Stories, from VOA Learning English.

Today we go out to the ballpark ... the baseball park!

We talk about an expression from the sport of baseball but now means so much more. 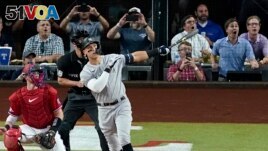 FILE - New York Yankees' Aaron Judge follows through on a solo home run, his 62nd of the season on Oct. 4, 2022. (AP Photo/Tony Gutierrez)

Inside baseball is something that is known or understood only by a small group of people. Sometimes inside baseball describes a subject that has too many uninteresting details. So, most people do not understand it or even want to understand it.

We commonly use this expression with subjects like politics, science, or finance.

For example, some urban voters are not interested in the inside baseball of constitutional reform. But, they still might support reforms promising good schools, safe neighborhoods, and jobs.

Here is another example. Many people would consider the yearly earnings reports of major companies as inside baseball information. The reports would not be of interest to them. But to investors such reports are important. These insiders need the information.

On its website, Merriam Webster online dictionary explains how this phrase began back in the 1890s.

To score in baseball, a player needs to land on first, second, and third bases before reaching home plate. That is where the player scores. One way to do this is to hit a home run. The player hits the ball so far that the other team cannot get it. Then, the batter and anyone else on a base moves forward all the way to home. That big hit will always please the crowd!

But most hits are not home runs. Most batters hit balls inside the field and move around the bases as other batters take their turns hitting.

This can include also very short hits called bunts, where the bat touches the ball lightly to keep it infield. There are also stolen bases -- when runners take a next base usually as the other team is pitching to a batter.

These are part of a long list of skills, tools, and possible plays used to play competitive baseball. This kind of play is called inside baseball. It is not an obvious type of scoring, especially when compared the dramatic homerun.

"Inside" is also featured in other popular terms in American English.

An inside joke, for example, is a joke that only a few people understand. With inside jokes, we often say this to those who don't understand: "You had to be there."

An inside track is a good position in a situation. It comes from racers on a circular track. The runners on the inside may have an advantage. Here's how to use it: She seems to have an inside track at the university. She knows everyone!

And finally, an inside job is something done with the help of someone inside an organization. The term, however, is usually used in connection with a crime. If police think a bank robbery was an inside job, for example, they would probably question all who work at the bank.

And that's all the time we have this Words and Their Stories. Until next time ... I'm Anna Matteo.

bunt – n./v. to push or tap (a baseball) lightly with a bat without swinging

infield – n. the area of a baseball field enclosed by the three bases and home plate