Update Required To play the media you will need to either update your browser to a recent version or update your Flash plugin.
By Dan Novak
28 June 2022

They started doing so after a Supreme Court decision Friday ended the constitutional right for a woman to choose to have an abortion. An abortion is a medical procedure that ends a pregnancy. The abortion pill is medicine that can be taken to end a pregnancy.

The social media posts that are being removed seemed aimed to help women living in states where pre-existing laws banning abortion went into effect after the high court ruling. 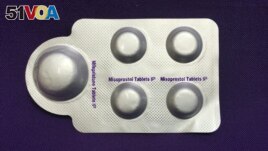 FILE - This image, courtesy of Plan C, shows a combination pack of mifepristone, left, and misoprostol tablets, two medicines used together to induce abortion, May 8, 2020.

After the ruling, posts explaining how women could legally get abortion pills in the mail suddenly increased across social platforms. Some even offered to mail prescriptions for the pill to women living in states that now ban the procedure.

Zignal Labs is a media intelligence and research company. It found that general mentions of abortion pills increased Friday morning across Twitter, Facebook, Reddit and on television broadcasts. There was also an increase in posts mentioning certain versions of the abortion pill, like mifepristone and misoprostol.

By Sunday, Zignal had counted more than 250,000 such mentions.

The Associated Press received a screenshot Friday of one Instagram post. The post was from a woman who offered to purchase or send abortion pills through the mail. She made the post minutes after the court ruled to overturn the constitutional right to an abortion.

"(Direct message) me if you want to order abortion pills, but want them sent to my address instead of yours," the post read.

Instagram quickly removed it. Vice Media first reported on Monday that Meta was taking down posts about abortion pills. Meta is the parent company of Facebook and Instagram.

On Monday, an AP reporter tested how the company would react to a similar post on Facebook. The reporter wrote: "If you send me your address, I will mail you abortion pills."

But when the AP reporter made the same exact post but changed the words "abortion pills" to "a gun," the post remained. A post with the same offer to mail marijuana was also left up and not considered a violation.

In an email, a Meta spokesperson said company policies bar the sale of certain items, including guns, alcohol, drugs and prescription drugs. The spokesperson did not explain the differences in how the company enforces the policy.

Meta spokesperson Andy Stone wrote in a tweet Monday that the company will not permit individuals to gift or sell prescription drugs on its platforms. But it will permit content that shares information on how to access pills. Stone admitted there were some problems with enforcing that policy across its platforms.

U.S. Attorney General Merrick Garland said Friday that states should not ban mifepristone. The medication is used to cause an abortion.

"States may not ban mifepristone based on disagreement with the FDA's expert judgment about its safety and efficacy," Garland said in a Friday statement.

But some Republican state lawmakers have already tried to stop their residents from getting abortion pills through the mail.

And some states, like West Virginia and Tennessee, ban healthcare providers from prescribing the medication through online appointments.

abortion — n. a medical procedure used to end a pregnancy and cause the death of the fetus

access — v. a way of being able to use or get something

prescription — n. a written message from a doctor that officially tells someone to use a medicine, therapy, etc.

mention — n. a short statement about something or someone

regulate — v. to make rules or laws that control

efficacy — n. the power to produce a desired result or effect