Update Required To play the media you will need to either update your browser to a recent version or update your Flash plugin.
By VOA
15 December, 2015


This is What's Trending Today

One of the actors has that to say in a parody video about men who take pictures of their wives for use on Instagram.

The three-minute video is actually a skit, or short, funny story, from a TV show called "The Mystery Hour" produced in Missouri. The skit makes fun of how men and women relate to each other in the social media era.

In the week since it first appeared on YouTube, "Instagram Husband" has been played over four million times. 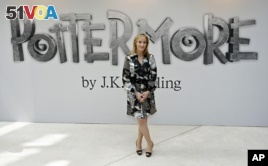 A new movie that is a prequel to the Harry Potter series will come out in 2016.

"Fantastic Beasts and Where to Find Them" trailer

Did you think you were finished with the world of Harry Potter and students at Hogwarts?

J.K. Rowling wrote a book in 2001 in the style of a textbook featured in the Harry Potter series. It was called "Fantastic Beasts and Where to Find Them."

In the Harry Potter series, the book was written by "Newt Scamander." That is the make-believe name Rowling used when she published the book.

The book details the study of 85 magical beasts around the world. Some of the "beasts" included in the book are dragons and flobberworms.

The movie's trailer came out on Tuesday. In just a few hours, it was seen over one million times.

The movie follows Scamander and others during an episode in New York City in the 1920s. It features actors Eddie Redmayne and Colin Farrell.

The movie will come out in November of 2016.

People who live near Los Angeles are understandably still worried about terrorism threats. The December shooting that killed 14 people happened in San Bernardino, only 96 kilometers away.

Today, the Los Angeles Unified School District closed all of its campuses after a terrorist threat was delivered via e-mail to some school board members.

The threat was not real. But as a precaution, the school district asked that 700,000 students not come to school.

The Twitter hashtag #LAUSD was used 50,000 times on Tuesday.

Similar threats were sent to school administrators in New York City, but schools were not closed there.

The closing proved to be a disruption for parents. They had to care for their children on an unscheduled day off. But most parents seemed to be supportive of the decision.

Do you think you might be an Instagram husband? What did you think of the video? We want to hear from you. Write to us in the Comments Section or on 51VOA.COM.

disruption – n. the act of to interrupting the normal progress or activity of (something)

trailer – n. a selected group of scenes that are shown to advertise a movie