Update Required To play the media you will need to either update your browser to a recent version or update your Flash plugin.
By Anne Ball
25 September, 2016


What do otters, chimpanzees, and one species of crow have in common?

All three are animals. They also use tools.

Scientists have long known that a crow native to New Caledonia is able to use tools. The birds use them to remove food from deep inside holes and crevices.

Now, American researchers have discovered a second species of crow that uses tools. Researchers with the San Diego Zoo reported on their experiments with Alala crows — a species from the Hawaiian Islands.

There are no more Alala crows living in the wild. But there are some of the birds still living in a protected area in Hawaii. They are considered critically endangered.

In an experiment, the researchers placed pieces of food in crevices inside a big piece of wood. The holes too deep for the birds to reach with their beaks. But, by using small pieces of wood held in their beaks, the birds quickly found a way to get the food.

The scientists said the crows demonstrated the ability to reach food in those cannot-reach-it places. The birds used small objects as tools, sometimes changing them by shortening a too-long stick. They also made tools from plant material.

"Tool use is exceedingly rare in the animal kingdom," said Christian Rutz of the University of St. Andrews in Scotland. He led the study, which was published in the scientific journal Nature. 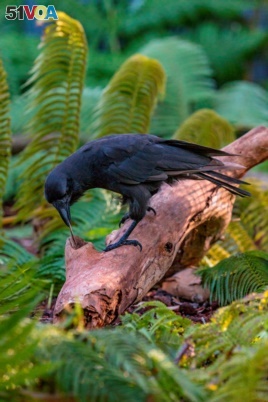 A captive Hawaiian crow using a stick tool to extract food from a wooden log is shown in this image released on Sept. 14, 2016. (Courtesy Ken Bohn/San Diego Zoo Global)

"Current evidence strongly suggests that tool use is part of the species' natural behavioral" pattern, Rutz said. It is not just something that happened in captivity.

"Using tools comes naturally to ‘Alala&#772;," he added. "These birds had no specific training prior to our study, yet most of them were incredibly skilled at handling stick tools," and they even quickly got the food in demanding jobs.

There are more than 40 species of crows and ravens, a similar bird. Many crows and ravens live far from cities in hot, humid areas. Rutz said this means it is possible that other undiscovered tool-users could be out there.

Kevin McGowan is an expert on birds with Cornell University in New York State. He spoke to VOA on Skype. He said finding out that the crows use tools is an important discovery.

"It kind of makes us rethink how to look at the whole tool-use idea now and gives us a little more ammunition to go out there and look for things that we may have overlooked before."

How did crows learn to use tools?

How did these birds learn to use tools? Scientists think their tool-using skills may have resulted, in part, from conditions in their Pacific island habitat.

The two species have one more thing in common: unusually straight beaks. The researchers wondered if this feature might be something they developed over time for holding tools. The birds use their beaks like the way people use thumbs on their hands.

All the Alala crows left in the world live in Hawaii. There were less than 20 Alalas left in the late 1990s when scientists decided to bring them into a protected area to increase their population.

Now, there are over 100 birds living in captivity. The San Diego Zoo said its researchers tested almost all of them and "they determined that the vast majority of them spontaneously used tools."

The Alala crows also showed that they are willing to steal from each other. While one did the work of getting the food, another bird took it, and ate it.

George Putic reported on this story for VOANews. Anne Ball adapted this story for Learning English with additional information from Reuters. George Grow was the editor.

crevice – n. a narrow opening or crack in a hard surface

spontaneously – adv. done or said in a natural and often sudden way