Update Required To play the media you will need to either update your browser to a recent version or update your Flash plugin.
By VOA
07 March, 2015


Across Asia, the increase in sales of high-priced goods and services has been partly fueled by the rise of China's middle class. Among the activities enjoyed by some wealthy Chinese is the ownership of horses. The quality of life tied to horses and horse ownership has become a new sign of success among a small, but growing group of people in China.

More than 60 years later, race tracks, polo fields and jockey clubs are opening for business in Chinese cities. And, there is a rising number of horses imported from overseas. 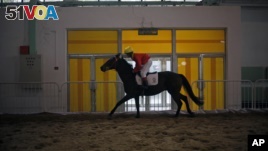 FILE - A Chinese jockey rides a horse at an equestrian and horse industry show in Beijing.

Maiken Jaeschke is with Equestrian Globe, a German company that imports horses into China. It also builds equestrian facilities and sells riding gear and equipment.

"China has seen a huge increase in the equestrian world and the equestrian market in general, and the interest in horses and horse sports over the last 10 years or five years, intensively."

China now has 25 horse racing tracks and 300 equestrian clubs. Land developers are building a $2 billion equestrian center in the city of Tianjin. It is called the Tianjin Equine Culture City. The developers have promised to build 4,000 stables to house horses. They have also said they will build a state-of-the-art medical center for the animals, 150 trainer offices and training areas. The development also will include a racecourse, clubhouse and an international equestrian college.

Shen Ge lives in Beijing. He buys horses. His 15-year-old daughter, Shen Qing, is one of the youngest competitive riders in China. She competes internationally in show jumping.

Shen Ge says there is a real interest in equestrian sports in China. But bad dealings between European horse sellers and Chinese buyers have damaged trust in the international market.

He notes examples of Chinese buyers attempting to negotiate deals for horses, and then canceling contracts at the last minute. He says some buyers even disappeared after a horse was sent to China, and the seller had already spent thousands of dollars on shipping.

Such stories do not concern American David Snodgrass. He brought the first American quarter horses to China. He says the Chinese market for quarter horses has increased in the past few years.

"We work in saddlebreds and standardbreds and with those breeds we've seen steady growth over the last three or four years."

Horse sellers say the market will only grow as interest in the sport increases.

Shen Ge has built his career in business marketing. He says his love of horses keeps him in the stables during most of his free time. He has passed this interest to his daughter, Shen Qing. He says she represents the future of the Chinese equestrian market. This month Qing will travel to Italy for yet another international jumping competition.

This report was based on a story from reporter Shannon Van Sant in Hong Kong. Mario Ritter wrote it for Learning English. George Grow was the editor.

equestrian - adj., having to do with or related to horses

contracts - n., a legal agreement between people or groups to do, provide or trade something

standard - adj., regularly and widely used, seen, or accepted : not unusual or special

Do you think horses will become popular in China? Let us know in the comment section.