International Community Warns of a Possible Famine in S. Sudan

Update Required To play the media you will need to either update your browser to a recent version or update your Flash plugin.
By VOA
07 April, 2014

The international community is warning of a possible famine in South Sudan if the fighting there does not end. Leaders of East African countries met recently in the Ethiopian capital Addis Ababa. They discussed ways to stop the fighting in the world's newest nation.

South Sudan's government and rebel forces agreed in January to end the fighting, but it has not stopped. There has been little progress in peace talks which are also being held in Addis Ababa. 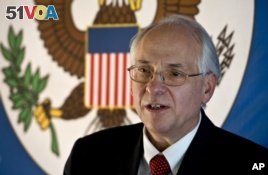 U.S. special diplomat Donald Booth spoke during the meeting of the East African Inter-Governmental Authority on Development(IGAD). Members of IGAD are leading the peace talks. Mr Booth said he is deeply unhappy that neither group is respecting the cease-fire.

"This failure has led to thousands of additional deaths, and an ever worsening humanitarian situation, with South Sudan facing a possible famine," Booth said.

The rainy season will come to South Sudan in just a few weeks, but many fields remain unplanted because people have fled their homes. They are afraid of the attack if they return. It is estimated that eight-five percent of families in South Sudan are farmers who depend on animals and agriculture to live.

Alexander Rondos is the European Union's special diplomat to the Horn of Africa. He said officials must act quickly, or there will be a famine in South Sudan.

"If people cannot go and plant, there will be not sufficient stocks within months. Livestock, a large proportion of the livestock population of a country populated by so many people who have pastoralist economy is lost. It is absolutely essential that all the necessary steps are made," Rondos said.

Government soldiers loyal to president Salva Kiir and those who support his former vice president Riek Machar began fighting in December. Tens of thousands of people have been killed.

The United Nations says more than 700,000 people have been displaced. The U.N. says more than 200,000 of them have fled to neighboring Countries, including Ethiopia, Kenya, Uganda and Sudan.

IGAD leaders may send African troops to South Sudan by the middle of next month. The troops would come from Ethiopia, Kenya, Burundi, and Rwanda. IGAD has also asked for support from the African Union and the UN.