Update Required To play the media you will need to either update your browser to a recent version or update your Flash plugin.
By Gregory Stachel
25 July 2022

African music is increasingly popular on the internet and on smartphones in places far outside of Africa. 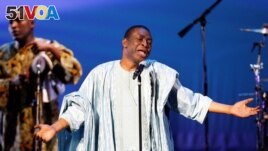 The service will digitize music catalogues, or collections of songs coming from the same owner, that are no longer available to buyers. The company aims to expand into the growing market for African sounds.

The interest from international companies is growing as African artists become the main performers at international music events like festivals and concerts. Festivals include Afro Nation in Portugal and Africolor in France. African musical forms such as Afrobeat, Rhumba, and Amapiano are topping popular music lists, known as charts.

Franck-Alcide Kacou is managing director of Universal Music Africa and the new Virgin Music Africa Label. He said it has over 15,000 music titles — or songs. Kacou added that it has 50 partner labels and around 100 artists from 25 countries.

Kacou said that the service will digitize and make available African music currently in music media like vinyl, cassette, or CD. The aim is to reach younger listeners.

Kacou told Reuters that "It's a real opportunity for countries that are also experiencing this digital transformation."

He said the service will support independent labels who are looking for a wider network.

Kacou said finding a producer in Africa and making cultural works available is a "real challenge" for many artists. He added that most artists do not receive a fair amount of money for their musical works.

transformation – n. a complete or major change in someone's or something's appearance or form

challenge – n. a difficult task or problem: something that is hard to do