Update Required To play the media you will need to either update your browser to a recent version or update your Flash plugin.
By Joe de Capua and Robert Raffaele
14 October, 2016


The International Day of the Girl was observed in the United States and a number of other countries earlier this week.

The United Nations General Assembly established the day in 2011 to bring attention to the rights of girls. The observance takes place each year on October 11. 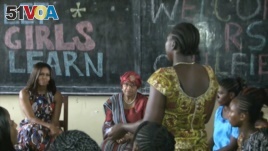 Michelle Obama speaks to spoke to school girls and women during her visit to Liberia last summer. Seated next to her is Liberian President Ellen Johnson Sirleaf. (Credit: )

The aid group, Save the Children, also released a report on Tuesday. It dealt with child marriage and other issues facing girls and young women.

The Best and Worst Places for Girls

Save the Children's report, called "Every Last Girl: Free to live, free to learn, free from harm," discusses the realities of child marriage.

The group says child marriage is among the most severe issues facing female children today. Each year, 15 million girls are married before the age of 18. Some of them are as young as age 10.

"One girl under 15 is married every seven seconds. And it's a big piece of what's holding girls back. What happens when a girl gets married at a young age is she drops out of school. She will probably have a baby very shortly after getting married at 13 or 14."

Miles says many child marriages result from a deal between the parents of the girl and the husband's family.

She adds that having babies at a young age is dangerous. The mortality rate for young mothers is much higher than for older women. The death rate for the child of a young mother is also high.

The report rates the best and worst places to be a girl. Out of 144 countries, Sweden received the top rating. The United States was rated 32nd.

At the bottom of the list is Niger. The report said the lowest-ranked countries suffer from high poverty, political unrest or conflict. Some have recently ended civil wars. Save the Children said such conditions are especially dangerous for girls.

Among the other issues used to rank countries were years of school completed and the number of women in high government positions.

Rwanda has the world's highest percentage of women in parliament -- 64 percent. However, Qatar has no female lawmakers. Having women in high positions of power helps to influence policy decisions that benefit women and girls, the group said.

A Need for Education and Leadership

The West African nation of Sierra Leone appears close to the bottom of the list in the report. However, it also has a woman in a powerful position. The nation's First Lady, Sia Nyama Koroma, is leading a campaign against child marriage and violence toward girls.

In Washington, another First Lady, Michelle Obama, held an event to mark the International Day of the Girl. The event helped publicize an international campaign called Let Girls Learn. Its aim is to provide education for girls who currently are not in school.

"Time and again, we have seen that, whether it's a head of state, a corporate CEO, or a teenage girl here in the U.S....when people hear your stories, the stories of girls who aren't in school, they're moved. And they're outraged. And better yet, they want to help."

Mrs. Obama visited Liberia and Morocco last summer. She said many young girls in the two countries struggle to receive an education.

The four young girls at the White House event described having to walk several kilometers to attend school. But the girls understand through education that they have the same value and abilities as boys.

One of the girls said to the audience: "We have a girl in our group from Morocco who does mechanical stuff. I mean, she's going to start operating her garage, which is something we thought only boys do," she said.

In an opinion piece for CNN.com on Tuesday, Michelle Obama called the issue of education for girls a personal one. She wrote that, as a child growing up in Chicago, neither her parents nor most of her neighbors, attended college. Financial aid helped her to pay for a college education at two of the world's most respected universities.

Let Girls Learn is a campaign launched by Barack and Michelle Obama in 2015. The United States is investing more than one billion dollars in the programs. The World Bank will invest more than 2 billion dollars over the next five years.

drop out v. to stop going to school, college, et cetera, before finishing

benefit – v. a good or helpful result or effect

corporate – adj. involving or associated with a corporation

CEO - title. a Corporate Executive Office (CEO) is the highest person in a company or organization

mechanical - adj. of or relating to machinery

garage - n. a shop where vehicles are repaired