Update Required To play the media you will need to either update your browser to a recent version or update your Flash plugin.
By VOA
24 January, 2013

The International Labor Organization says nearly 200 million people are without jobs. And the ILO is warning of even higher unemployment this year.

The United Nations agency this week released a report called "Global Employment Trends 2013". It says the number of unemployed worldwide rose by more than four million last year, compared with 2011. The report says one fourth of this increase was in developed economies. The remaining 75 percent were in mainly developing economies in Asia, and in African countries south of the Sahara Desert. 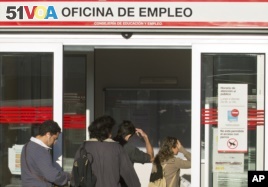 People enter an unemployment registration office in Madrid, September 4, 2012.
The report says an estimated 39 million people stopped looking for work last year. It says the average length of unemployment increased sharply in developed economies. One-third of all job seekers there were unemployed for a year or more.

The ILO's Director-General, Guy Ryder, is concerned about the world economy. He says the recovery is not expected to be strong enough to reduce unemployment quickly. 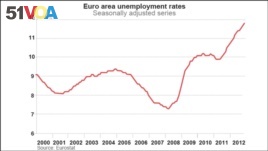 Unemployment in Europe, 2000-2012
"We see that unemployment is set to rise again. Our projection would be for 5.1 million more in 2013 and still a further 3 million in 2014. So the trends are very much in the wrong direction."

The ILO report says the labor market is especially difficult for young people. It says almost 74 million people between the ages of 15 and 24 are unemployed worldwide. That represents an unemployment rate of 12.6 percent.

Guy Ryder says the ILO has been warning about the risks of what it calls a "lost generation." He has called on policy makers to support youth employment.

Mr. Ryder says all countries, especially developed ones, must provide more predictable policies. He says these policies must include measures to increase wages and support stronger consumption. And he says countries should enact reforms to strengthen the banking industry, so banks can support investment and provide credit.

While the I.L.O. believes there is reason to be concerned about the world economy, the International Monetary Fund expects the international economy to grow slowly this year. A new IMF report predicts that international growth will reach 3.5 percent in 2013. That would be three tenths of a percent better than the rate last year.
Related Articles
go top