Update Required To play the media you will need to either update your browser to a recent version or update your Flash plugin.
By Dan Friedell
31 December 2022


A growing number of international students are playing high-level sports in college. And since 2021, college athletes have been permitted to make money through product sponsorships and commercials.

Some of the most well-known college athletes are now able to make hundreds of thousands of dollars or more. Such deals are called Name, Image and Likeness, or NIL deals.

But the situation is different for student athletes who are not U.S. citizens. That is because they are in the country on a student visa that does not permit them to work. 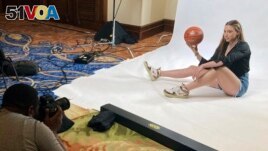 Some international students become well known in the U.S. because they play on famous sports teams, like the men's basketball team at the University of Kentucky.

A recent study showed that international students make up about 12 percent of the athletes at NCAA Division I colleges. Division I is the top level of college sports.

The student visa only has rules limiting work in the United States. So, some international student athletes have found ways to make NIL money when they travel out of the county.

Marta Suarez is from Spain and plays basketball for the University of Tennessee. During her team's recent visit to the Bahamas, she took pictures as part of her work with a company called Influxer.

Influxer tries to help student athletes make money from their fame. If a student who works with Influxer makes an agreement with a company to promote a product, they get paid and Influxer gets paid for setting up the deal. Influxer paid Suarez and other students for the time they spent taking photos in the Bahamas.

Tyler Jaynes founded Influxer. He noted that there is no guarantee that the students will make money. But he said he wants to be sure the students have some photos and videos in case an advertiser wants to use them.

He can then provide the photos to a business that might want to use them to sell a product. The students would be paid a fee for giving the company the permission to use their photo.

One of the students who took photos with Influxer recently is Brendan Favre. He plays basketball for DePaul University in Chicago. He is from Switzerland.

He and Jaynes looked through the images on an iPad after the photo shoot. They said the photos looked good because some of them were taken so that a product could be added in later.

One reporter estimated Tshiebwe is likely to earn close to $2 million this year through NIL deals. Tshiebwe was the first player to take photos with Influxer during a University of Kentucky trip to the Bahamas last August.

Rennie said she is used to doing photos as part of the team in Tennessee. But she said it was nice to do something "that was more about me and who I am, and it's going to be for my benefit."

Hornery said it has been hard to watch his American teammates get money that he cannot receive. "We have people come to practice and pitch us stuff all the time, and I'm just like ‘Man, I can't do it,'" he said.

Hornery said he was happy to have the chance to take photos with Influxer, and "whatever happens, happens."

"It will be solved," he said. "They just might have to take a flight."

For Influxer, there is no way of knowing if their investment in the athletes will pay off. But the company is planning some similar photo events next year.

Steve McLean works to develop business for Influxer. "There's going to be a lot of trial and error," he said. "And we're open to all of it."

athlete–n. a person who is trained in or good at sports, games, or exercises that require physical skill and strength

sponsorship–n. an arrangement in which a sponsor agrees to give money to someone or something

promote–v. to say something good about an item or someone

pitch–v. to tell someone about an idea, usually for business

benefit –n. something that has a good or helpful result

trial and error –v. a test or a guess that is part of the process in discovering something new