Update Required To play the media you will need to either update your browser to a recent version or update your Flash plugin.
By Dan Friedell
23 July 2022


Diana Vicezar of Paraguay is heading into her third year at Pitzer College in Claremont, California.

Early in the pandemic, Vicezar could not come to the United States. She spent her first year of college learning by video from the South American country.

During that time, Vicezar said she talked with over 100 international students studying in the U.S. She found out that many experienced difficulties while looking for internships or work. Besides visa restrictions, they said there was a lack of professional development resources at the schools. 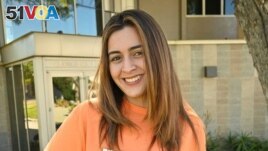 Some did not know about the Optional Practical Training program or OPT. It is a U.S. government program that permits international students to stay in the U.S. for one more year after graduation and work in their field of study.

"I have met with many students who didn't know about OPT or who didn't know how to write an American-style resume, who didn't know who to reach out to for help. And they have to go back to their countries because, you know, they didn't have enough time to work on their applications or do their research because it was too late."

That is when Vicezar started working on a website designed to help international students with internships and job hunting in the U.S.

After almost two years, Mapis was launched last February. The site is currently open to a small number of users. Vicezar said she hopes to make it available to all international students later this year. And she is building the website while working on an internship program at the technology company Meta.

One professional who knows what it is like to be an international student is Eunkyu Lee who came from South Korea in the 1980s. He is now a professor and a leader of Syracuse University's business school.

Lee said many international students know that it will be harder for them to find jobs than American students if they want to stay in the U.S. As a result, they start learning about visa and work programs early on.

He said it is a good idea to join a networking group centered on international students such as Mapis, along with a more general service such as LinkedIn.

"If you don't have that kind of network or mentoring, then the only resource you may have is just the official job posting which receives hundreds of resumes. ... And there, it may be really difficult for international students to stand out."

Vicezar agreed that it is important for international students to hear from successful people who were once new to the U.S. It helps them feel more confident about their own abilities. In 2022, Mapis organized several online gatherings to connect students with those working in business, journalism and technology.

Vicezar told VOA that learning English changed her life. She said she would not be where she is today without a scholarship from the English Access Microscholarship Program in Paraguay.

"I always say, you know, like, I was born again when I was 15, when I got this scholarship. ... My whole life changed after that. Coming to the U.S. for college also opened other doors for me, like the internship I have right now and also creating Mapis. So, yeah, I always motivate people to study English."

Vicezar also attended the Education USA Academy at Temple University in Philadelphia one summer, where she lived and learned with Americans and other international students.

Beyond STEM, or subjects in science, technology, engineering and math, Vicezar wants Mapis to be a place where international students can learn about business, social programs and government.

In fact, Lee, the Syracuse professor, said community service projects are a great way for international students to expand their networks and learn to work with Americans.

Vicezar agreed. "After they go back to their countries, they usually make a big impact," she said.

internship–n. an opportunity for students to get work experience, often during college

style–n. the way in which something is done

resume–n. a short document describing your education, work history and accomplishments you give to an employer

application–n. a request to be considered for something such as admission to school or a job

network–n. a group of people who are connected to each other, often in the same work field

mentor–n. an experienced person who can offer guidance and support

scholarship–n. money given to someone to pay for school or an educational experience

motivate–v. to give someone energy or encouragement to do something

pursue–v. the act of chasing or going after something

impact–n. to make a difference or have an effect or change something