Update Required To play the media you will need to either update your browser to a recent version or update your Flash plugin.
By Pete Musto
01 July, 2017

Faith Rotich always thought she would stay in Kenya to seek a university education.

Rotich is from Eldoret, a town of about 290,000 people in the western part of the country. After she completed high school in 2012, the University of Nairobi accepted her into an undergraduate program.

However, Rotich says at that time there was limited space at Kenyan public universities. Many students had to wait a year or more after schools accepted them before they could begin studying. During her year of waiting, she began thinking about other possible choices.

Rotich then learned of the Kenya Scholar-Athlete Project, or KenSAP. This program helps gifted high school graduates with little money gain admission to selective colleges in the United States and Canada. With the help of KenSAP, she applied to several schools, all in the northeastern part of the U.S. called New England.

In 2014, Dartmouth College accepted Rotich to start her undergraduate studies in mathematics.

Dartmouth is a private research university located in Hanover, a town of about 11,200 people in the northeastern state of New Hampshire. In 2016, more than half of the town residents were students at the school. 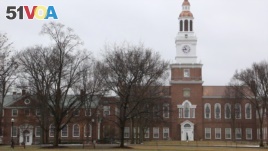 Outside on the campus at Dartmouth College in Hanover, New Hampshire

Dartmouth is one of eight private colleges and universities in the Ivy League. The schools are widely considered to be some of the best in the world. From 2011 to 2013, Dartmouth earned the highest rating in the country for ‘Strong Commitment to Teaching' from the website U.S. News & World Report.

Dartmouth selected Rotich for its King Scholar Leadership Program. This program chooses students from developing nations and helps pay for and supports them in their education at the college. Upon graduation, they are expected to return to their home country to help fight poverty.

When she arrived in fall of 2014, Rotich says she could not believe her eyes. She says she was surprised at how much the school and the town looked like pictures she had seen on the internet.

"I felt some kind of happiness, that I want to explore this place, I want to know what it's like. Then later on ... I met some wonderful students who immediately made me feel like I really belong here."

In her first year, Rotich started taking pictures for the university newspaper. As her interest in photography grew, the 22-year-old held special events to share her works with even more people.

Rotich has also explored different ways of thinking. She says where she is from, people believe in a form of Christianity with strong, conservative rules. At Dartmouth, she took a religion class that asked her to question some of those beliefs.

Her mother grew concerned that Rotich might lose respect or support for her own culture as a result, she says. But after Rotich explained that the purpose of classes like these was to improve her critical thinking, Rotich's mother grew less worried. Her mother came to see the value in the respectful way professors teach these classes.

Exploration has been a big part of Rotich's experience at Dartmouth. Now she is even considering changing her subject of study from mathematics to economics and anthropology.

Gilbert Rahme is from Beirut, Lebanon. Like Rotich, he also had little money growing up.

After completing his education at a Catholic high school, he had two choices: work as a bartender or attend the country's only free public university - Lebanese University. He chose a university education and, in 2008, earned undergraduate degrees in biology and geology.

In 2009, Rahme began a master's degree program in biology at the American University of Beirut. It was there that his interest in scientific research began to grow.

Rahme says he became increasingly interested in studying cancer and how to fight it. Halfway through the master's program, he applied to several well-known research schools in the U.S. for his doctorate degree. 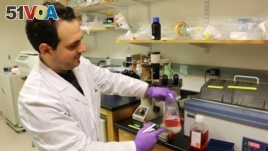 Rahme was especially drawn to Dartmouth because he loves cold weather. The average winter temperature in Hanover, New Hampshire is between about -2 and -12 degrees Celsius.

Students applying to almost any doctorate program in the U.S. have to go through an intensive interview process. But Rhame says the focus on academics and research and the difficult interview at Dartmouth excited him.

Rahme says there are few problems he has faced in the last seven years at Dartmouth that he has not been able to solve.

After the terrorist attack on the Boston Marathon in 2013, some Americans said insulting things about immigrants. But Rahme used that moment to explain how hurtful comments like that could be for immigrants like himself.

He feels his experiences meeting different types of people at Dartmouth have been just another way of learning more. And he says the more knowledge he gains, the more he wants to share.

Pete Musto reported this story for VOA Learning English. Hai Do was the editor. Lucija Milonig produced the video. We want to hear from you. What different kinds of knowledge do you think you might be able to gain while studying in a foreign country? How do you think that knowledge might help you in your daily life? Write to us in the Comments Section or on 51VOA.COM.

undergraduate – adj. used to describe a degree that is given to a student by a college or university usually after four years of study

selective – adj. careful to choose only the best people or things

doctorate degree – n. the highest degree that is given by a university

academics – n. courses of study taken at a school or college

funding – n. the amount of money that is used for a special purpose

equivalent – n. having the same value, use, or meaning