Rolling with the 'Tide' at the University of Alabama

Update Required To play the media you will need to either update your browser to a recent version or update your Flash plugin.
By Pete Musto
18 June, 2016


EDITOR'S NOTE: This story is part of a new ongoing series about international student life at colleges and universities across the U.S. Please join us over the next several weeks as we bring you stories about these amazing individuals and the American higher education system as a whole.

Pablo Ramos is from Spain. He says friends studying at Spanish universities tell him their experiences are very limited.

"Their college experience is basically just going to class. Everything after that is just extra and it's completely up to them."

Ramos thought he too would be limited to the normal experience of a Spanish university.

In 2013, Ramos attended St. Andrew's Sewanee School in Sewanee, Tennessee. He had the help of a scholarship from an organization called American Secondary Schools for International Students and Teachers.

While studying at St. Andrew's, Ramos became friends with the son of the Dean of Engineering at a university just a few hours away.

That university was the University of Alabama in Tuscaloosa, Alabama.

Founded in 1831, this university of over 37,000 students is known for many things. It is the oldest public university in Alabama. Northern troops burned down the original campus during the American Civil War.

The campus has an American football stadium that can fit over 101,000 people and the football team has won 16 national college championships.

The University of Alabama also has a troubled history of dealing with discrimination. It was at the center of the Civil Rights Movement.

Autherine Lucy was the first African-American student to attend the school in 1953. She was forced to leave the school after only three days because of threats made against her. 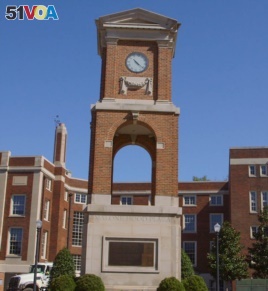 Former Alabama governor George Wallace famously tried to prevent two more African-American students from attending in 1963. But Wallace was unsuccessful and the school began to accept students of all races.

Some of Ramos's friends thought he must be insane to go to school in Alabama. Yet this did not stop him from starting an undergraduate degree in chemical engineering there in 2014.

Yilin Wang from Beijing, China started her undergraduate degree in psychology at the University of Alabama in 2013.

Both had difficulty making friends when they first arrived. They say that it was only after they began to explore extracurricular options that they began to make lasting friendships.

A meeting of the University of Alabama's anime club

The group brings students who love anime, comic books and other similar media together to discuss their interests.

She also joined the Subcommittee on Diversity and Inclusion, a group of students, professors and staff, in early 2016.

The group works to make the school a more welcoming place for all people. Joining this group has taught her a lot, Wang says.

"I really learned a lot about how people think about diversity and how important diversity is. It's all about starting the conversation in the right way so that people understand each other."

Ramos was immediately interested when he learned of a group called the Student Government Association, or SGA. The SGA members work with the school's administration to plan events and programs, as well as make rules for students to follow.

Ramos has now been elected as a member of the SGA senate and hopes to get other students more involved. He has made many friends through his involvement. He says he is considering a future in politics.

"The chance to participate in campus politics or be part of organizations or be able to create your own or do research as an undergrad. Those are things that people in Spain don't even think about at all, but people here just take for granted."

Other than football, the most popular extracurricular activity is "Greek life." Greek life is the name for the collection of fraternities and sororities at any university. These are private social clubs that students can attempt to join.

These organizations use letters from the Greek alphabet as their names. If one of these organizations accepts a student, they must pay to be a member. Members often live together in a house. They form powerful social networks that last a lifetime. They often help their "brothers" and "sisters" find jobs after college. 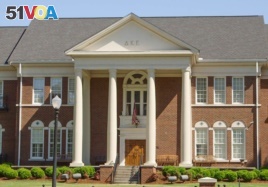 The Delta Kappa Epsilon fraternity house at the University of Alabama.

In some fraternities and sororities, new members must do whatever an older member tells them to show their loyalty.

The University of Alabama has some of the most active Greek life in the country. Over 33 percent of all the school's undergraduates are involved in 61 different Greek life organizations. At times, there can be divisions between the school's Greek and non-Greek students.

But one thing almost all students can agree on is "Roll Tide." Wang says no matter who you are, when you understand the meaning of "Roll Tide" you will feel like you belong.

"Roll Tide" is an expression that people all over the school say to each other. It comes from the name of the school's sports mascot, the Crimson Tide. But Wang says there is more to it than simply sports.

"I've asked a lot of people and they just tell me ‘Roll Tide' doesn't really have a definition of what it means. They just use ‘Roll Tide' to replace ‘Okay,' ‘That's good,' ‘How are you?' Everything."

Ramos says if a student starts saying "roll tide" in everyday conversation, they are truly part of the University of Alabama family.

Pete Musto reported and wrote this story for VOA Learning English. Adam Brock produced the video. Hai Do was the editor.

Now it's your turn. What extracurricular options are there at universities in your country? Do groups at your school try to include everyone? Let us know in the comments section or on 51VOA.COM.

dean – n. a person who is in charge of one of the parts of a university

undergraduate degree – n. a degree that is given to a student by a college or university usually after four years of study

psychology – n. the science or study of the mind and behavior

extracurricular – adj. used to describe extra activities such as sports that can be done by the students in a school but that are not part of the regular schedule of classes

animated – adj. produced by the creation of a series of drawings or pictures that are shown quickly one after another

comic book(s) – n. a magazine that is made up of a series of comic strips

take for granted – idm. to fail to properly notice or appreciate someone or something that is helpful or important to you

fraternities – n. organizations of male students at a U.S. college

sororities – n. organizations of female students at a U.S. college

mascot – n. a person, animal, or object used as a symbol to represent a group, such as a sports team, and to bring good luck