Update Required To play the media you will need to either update your browser to a recent version or update your Flash plugin.
By Pete Musto
04 June, 2016


EDITOR'S NOTE: This story is the first part of a new ongoing series about international student life at colleges and universities across the U.S. Please join us over the next several weeks as we bring you stories about these amazing individuals and the American higher education system as a whole.

Beautiful beaches. Glamorous nightlife. These were the scenes Mandisa Haarhoff imagined when she learned the University of Florida had accepted her.

She was picturing Miami.

But Haarhoff quickly learned that the University of Florida is really in the city of Gainesville. Gainesville is a city of over 128,000 people in the northern part of Florida, an almost 5-hour drive from Miami.

Gainesville also has no beaches, only swamps — filled with alligators.

Haarhoff is originally from Port Elizabeth, South Africa. She applied to several schools across the U.S. to earn a doctorate, or PhD, in English studies.

In 2012, the University of Florida invited her to join their program. Founded in 1854, the school is a top-ranked public research university. It is home to nearly 50,000 students, about 6,000 of whom are international. 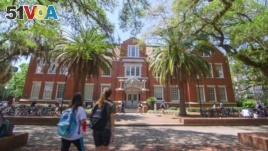 The University of Florida is located on a beautiful 800-hectare campus in Gainesville, Florida.

The U.S. government gave Haarhoff a Fulbright scholarship to pay for her first two years there.

Haarhoff was excited to study in the U.S. and pursue her dream. But she also felt sad when she arrived at Gainesville. She was not sure she would enjoy living in this small Florida city. Her first days were difficult. She says she missed her family and the food back home.

But after a short time, she fell in love with Gainesville. She loved how green the city is. She enjoyed being able to ride her bike everywhere. And before long, she got into the "Gator spirit." 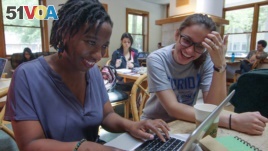 Mandisa Haarhoof reviews an essay with one of her undergraduate students.

"So I was a big follower of the Gator spirit and that was a great way to get me into school spirit. ... You'd find me in the stadium literally screaming."

Just about every college in the US has a symbol or image that represents the school. The symbol, usually an animal, is called the mascot. The purpose of mascots is to make students feel like part of the school community.

The University of Florida's mascot is an alligator, or gator. Alligators can be found everywhere in Gainesville, even on the university's campus!

The gator mascot represents the University of Florida's sports program. The university has many sports teams, but its American football team is by far the most popular. The football stadium holds nearly 90,000 people. 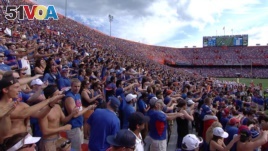 Fans and students call their loyalty to the University of Florida "gator spirit." The feeling unites them. It reminds them they are all part of the same school family. Haarhoff says the gator spirit made her feel welcome.

From Germany to Gainesville

Paula Roetscher is another foreign student at the University of Florida. She is from Buttstädt, Germany. She came to Gainesville as an undergraduate student in 2012.

Roetscher struggled at first to adjust to a new culture. She says American students share their feelings and opinions with strangers much more than Germans do. She also says she had to learn to be more open-minded.

Roetscher also had to adjust to a foreign language. She says she was only somewhat prepared to study at the college level at an English-speaking university.

In high school, Roetscher studied at an International Baccalaureate, or IB, program. IB is an international organization that teaches international issues in different and more challenging ways than a traditional education does.

IB programs for high school students help prepare them for college. Students can also use IB classes as credit towards their degree.

Roetscher says she completed her IB program with strong English skills. But those skills were not good enough when she first arrived at the University of Florida. She says that doing everything in English is difficult, even for students who are well-prepared.

"One expectation, I think, is that if you're good at writing and reading English back home in school, you think you'll do well here, too. But then, of course, you have to speak English and that's a big challenge for a lot of international students..."

Roetscher now speaks English like a native speaker. Her main challenge these days is the hot, humid weather in Florida.

Her early difficulties she did not stop Roetscher from taking full advantage of the academic opportunities at the University of Florida.

Roetscher chose to seek two undergraduate degrees: one in sustainability studies and another in geography. She also chose to seek a minor degree in the Arabic language. She has been studying Arabic since she was 11 years old. Paula Roetscher studies Arabic at the University of Florida.

Roetscher says university students in Germany usually complete an undergraduate degree in fewer than four years. She also had some extra credits from her high school IB program. Therefore, she felt she could do more with the time she had.

Roetscher is also taking advantage of opportunities outside the classroom. She has a special interest in refugees.

In 2015, she joined the Interfaith Alliance for Immigrant Justice. The group is collection of different religious organizations who fight for immigrant rights.

Roetscher and the organization work with the city government to make Gainesville an official "Welcoming America" city.

Welcoming America is an organization of U.S. cities that agree to provide resources for immigrant communities.

Haarhoff, the graduate student from South Africa, also succeeds outside the classroom. She says she has always been interested in acting, singing and dance. So she joined the Actor's Warehouse, a local theater company. She has now won several awards for her part in the play called "Tshepang." 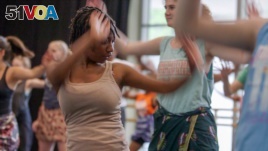 Mandisa Haarhoof attends an African dance class at the University of Florida.

Haarhoff still misses South Africa and plans to return when she completes her Ph.D. But she says making American friends along with international friends is the best advice for someone feeling lonely.

Now, with everything she has learned from her friends and her studies, she has a lot to share when she gets home.

Now it's your turn. What else do you know about the University of Florida? Do you think you would want to study there based on this story? Let us know in the Comments section or on 51VOA.COM.

beach(es) – n. an area covered with sand or small rocks that is next to an ocean or lake

swamp(s) – n. land that is always wet and often partly covered with water

alligator(s) – n. a large reptile that has a long body, thick skin, and sharp teeth, that lives in the tropical parts of the U.S. and China, and that is related to crocodiles

applied – v. asked formally for something such as a job, admission to a school or a loan, usually in writing

scream(ing) – v. to suddenly cry out in a loud and high voice because of joy, pain or surprise

humid – n. having a lot of moisture in the air

distinct – n. different in a way that you can see, hear, smell or feel

taking (full) advantage of – idm. using something, such as an opportunity, in a way that helps you

sustainability – n. the ability to use something without completely using it up or destroying it

geography – n. an area of study that deals with the location of countries, cities, rivers, mountains and lakes

minor degree – n. a second subject studied by a college or university student in addition to a main subject