Adapting to Change at the University of New Mexico

Update Required To play the media you will need to either update your browser to a recent version or update your Flash plugin.
By Ashley Thompson
16 June, 2018


Leaving one's childhood home and moving somewhere new and unknown can be a difficult thing for people to do.

No matter where you go, there are challenges that come with being somewhere new, including finding your way around and making friends.

Jose Miguel Ayala Salas faced these challenges and more when he left his home country of Ecuador for the United States.

The 20 year-old was born in Quito, the country's capital. When he was in high school, his father decided to seek a doctoral degree at the University of New Mexico. That was in 2015. 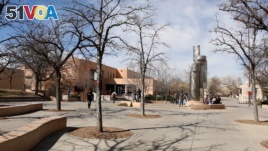 Students walk across the University of New Mexico campus in Albuquerque, New Mexico.

Ayala Salas's father asked his son if he would join him in New Mexico. His father suggested he would have many life-changing experiences as an international student.

Ayala Salas says the decision was not an easy one. His mother would stay in Quito, and he had never been that far away from her in his life. And, although he grew up speaking both Spanish and English, he still did not feel his English abilities were very strong.

In the end, Ayala Salas agreed to go with his father to the United States. The two moved to the city of Albuquerque, New Mexico. Ayala Salas began studying at Albuquerque High School.

Ayala Salas says that, from the beginning, the language barrier proved to be a serious problem for him.

He says he had no difficulty speaking in English for presentations and other activities in his classes. But he found it very hard to build friendships with anyone who did not speak Spanish themselves.

But Ayala Salas did not let these difficulties defeat him. He says he learned to believe in himself and never give up, an important lesson for anyone in a similar situation.

"Don't care about making mistakes. At some point you're going to improve. But you've got to fail first. You've got to just talk and don't care about your accent, about your vocabulary. Just do it until it improves and gets better, to the point where you can actually communicate with people."

Ayala Salas's belief in himself ended up taking him further than he could have imagined, he says. He completed his high school education in Albuquerque. And because he had lived in New Mexico for over a year at that point, the state considered him a legal resident.

At most American public colleges and universities, the cost of attendance is lower for state residents. New Mexico also offers financial help for graduates of the state's high schools who seek higher education at an in-state public college or university.

Ayala Salas says that with that kind of support in place, he was more than happy to continue following his father's path. And in 2016, he, too, became a student at the University of New Mexico.

The University of New Mexico, or UNM for short, is a public research university. It was established in 1889. It serves over 26,000 students. The school is in the middle of Albuquerque, which is surrounded by both mountains and desert.

Ayala Salas says he was pleased that the school accepted him to its undergraduate program in political science. But even though he had succeeded as a high school student in America, he still faced additional challenges as a college student.

This included learning how to be independent, he says.

"In Ecuador ... when people graduate from high school they go directly to college in the same city. ... So when you go to college, you are expected to still live with your parents. They take care of you. They pay the bills. They cook for you. Well, here in ... at UNM ... it was quite different for me. I had to take care of myself, pay rent, take care of the house."

It was not long before Ayala Salas found another source of support: his girlfriend, Araceli. They met through their parents. Her mother was Ayala Salas's father's professor at UNM. Ayala Salas and his girlfriend quickly became close, he says, and they eventually moved in together. She had been living on her own since she was 16, so she was able to teach him a lot about how to be an independent adult.

Personal relationships are also what helped Anima Bista come to enjoy life as an international student at UNM. The 26 year-old is from Narayangarh, Nepal. She completed her undergraduate studies in her home country in 2015. But she says she always knew she wanted at least part of her education to take place overseas.

So Bista chose to complete a master's program in civil engineering at UNM. But she never really felt that far from home; when she moved to Albuquerque, she found housing with four other Nepalese students.

Bista says at first she felt she had to surround herself with familiar faces. That is because, in a way, everything she was experiencing was new and unknown. She says she and her friends from Nepal all had ideas about how to behave or what to wear, for example. Those ideas came from the way how they grew up back home.

"Our people there, we are pretty much not that open-minded like the people here in the United States. And then there's a lot of cultural differences. Like, even today, when the girl goes out alone at night, back in my country they don't feel safe because that's how our cultures have been, you know?... But here it's so open. Like, you can move around free. You can go around free."

Bista admits that she and her friends felt somewhat unprepared for life in America. But she adds that going through the process together helped them all adjust and adapt.

Bista was also able to make American friends. She says they have taught her to enjoy many activities outside of school, such as hiking.

Ayala Salas now works there, too. He and Bista both agree that while trying find solutions on your own is important, it never hurts to have other people there to help you find your way.

Pete Musto reported this story for VOA Learning English. Ashley Thompson was the editor. We want to hear from you. How do you adapt to new situations and environments? What advice can you give to others who are making huge changes to their lives? Write to us in the Comments Section or on 51VOA.COM.

accent – n. a way of saying words that occurs among the people in a particular region or country

resident – n. someone who lives in a given place

undergraduate – adj. describing a degree that is given to a student by a college or university usually after four years of study

bill(s) – n. a document that says how much money you owe for something you have bought or used

rent – n. money that you pay in return for being able to use property, especially to live in an apartment or house that belongs to someone else

master's (degree) – n. a degree that is given to a student by a college or university usually after one or two years of additional study following completion of an undergraduate degree

adjust – v. to change in order to work or do better in a new situation

hiking – n. to walk a long distance especially for pleasure or exercise