Update Required To play the media you will need to either update your browser to a recent version or update your Flash plugin.
By Jim Dresbach
18 June, 2016


You might remember getting chickenpox as a child or even as an adult.

The virus is best known for its red rash, blisters and itching. It also causes tiredness and fever.

Because chickenpox is contagious, siblings or students in the same classroom often spread the virus to one another. But researchers have found that the chickenpox virus may actually be a seasonal disease: Cases are discovered most often in the spring. 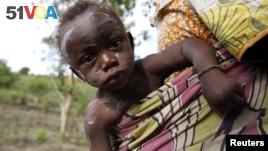 A child from Bunia in eastern Democratic Republic of Congo suffering from chickenpox is carried by her mother at the Kyangwali refugee settlement in Hoima district in Western Uganda, March 25, 2014. (REUTERS/Thomas Mukoya)

The study was published in the Proceedings of the National Academy of Sciences.

To investigate trends in chickenpox cases, researchers turned to the search engine Google. They looked at Google searches from 36 countries on five continents over an 11-year period, then confirmed their findings with clinical cases.

Previously, researchers have used Google to estimate and research rates of influenza.

Kevin Bakker is the lead author of the chickenpox study and a graduate student at the University of Michigan. He said countries that required a nationwide vaccination for chickenpox also saw a decrease in the number of Googles searches for "chickenpox."

Dr. William Schaffner is an infectious disease expert at Vanderbilt University Medical Center in Nashville, Tennessee. He was not involved in the study, but he said the findings may be especially useful.

Schaffner thinks information will help in countries where the chickenpox vaccine is not common.

In the United States, chickenpox vaccinations began in 1996. Since then, the number of chickenpox cases declined by 92 percent, according to the Centers for Disease Control and Prevention.

The same virus that causes chickenpox can also cause a medical condition called shingles.

This story first appeared on VOANews. Jim Dresbach adapted the story for Learning English. Kelly Jean Kelly was the editor.

chickenpox – n. a disease that often affects children and that causes a fever and red spots on the skin

rash – n. a group of red spots on the skin that is caused by an illness or a reaction to something

blisters – n. raised areas on the skin that contain clear liquid and that are caused by injury to the skin

influenza – n. a common illness that is caused by a virus and that causes fever, weakness, severe aches and pains and breathing problems

shingles – n. a disease that causes pain and red marks on your skin along the path of a nerve