Update Required To play the media you will need to either update your browser to a recent version or update your Flash plugin.
By Bryan Lynn
10 August 2022

NASA officials said the new images represented the Webb's ability to gather data and capture observations in more depth and detail than any other space telescope ever built.

The images – which showed distant space clouds and objects in highly colorful detail – were widely shared online. Many social media users commented on the extreme clarity and depth seen in the pictures. 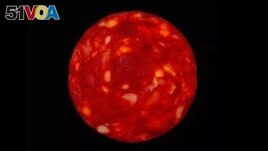 French scientist Etienne Klein wrote on Twitter that the object pictured was a Webb-captured image of Proxima Centauri, the nearest star to the sun. (Etienne Klein/Twitter)

NASA has said the high level of detail is made possible because the Webb telescope was built with the latest technology to observe infrared light.

The new images were released July 12. NASA has continued to release information and images about the Webb on the telescope's official Twitter page.

Recently, a French scientist also published a tweet that included an image he claimed had been observed by the Webb. The scientist is Etienne Klein, a well-known physicist in France and the director of research at the country's Alternative Energies and Atomic Energy Commission.

The image Klein posted appeared as a round object surrounded by a black background. The object was mostly deep red, with other small, round shapes appearing yellow, orange and white.

Klein wrote on Twitter that the object was a Webb-captured image of Proxima Centauri, the nearest star to the sun. Klein described his excitement at the posted image. "This level of detail... A new world is revealed every day," he wrote.

But in fact, as Klein later admitted, the picture was not of Proxima Centauri. Instead, the image showed a cut piece of Spanish sausage called chorizo. The physicist said he published the image and tweet as a joke.

Some internet users immediately recognized the image as being false. Others, however, retweeted it with excitement, as another great example of the observation abilities of the Webb telescope.

In admitting his joke, Klein wrote that in modern astronomy, "no object belonging to Spanish charcuterie exists anywhere but on Earth."

Klein said he realized many users had not understood his joke. He said his reason for posting the image was to urge the public to "be wary of arguments from people in positions of authority."

One Twitter user agreed with Klein's thinking and said he found the post "funny." He added: "And it should teach you a valuable lesson not to blindly believe everything you read without questioning it..."

But others suggested such a joke did nothing to help the problem of false news that continues to flood the internet and social media services.

One user tweeted, "Misinformation is dangerous, we believe in almost everything we are told and we don't have doubts when a scientist (provides) information."

Another wrote Klein's action represented a "misuse of power" and called for the scientist to be fired.

Klein later issued an official apology, saying he was sorry for what he described as a "scientist's joke."

"I come to present my apologies to those who may have been shocked by my prank, which had nothing original about it," he wrote.

A short time later, he posted another picture on Twitter. But this time it was an actual James Webb image released by NASA. He urged Twitter users to trust him this time that the image – of the famous Cartwheel Galaxy – was truly real.

Bryan Lynn wrote this story for VOA Learning English, based on reports from Agence-France Presse, Twitter and NASA.

reveal – v. give someone a piece of information that is surprising or was previously secret

meme – n. images created for the internet that bring back fun or happy memories or make fun of something

charcuterie – n. a branch of cooking that involves meats and meat dishes

wary – adj. not trusting of something

authority – n. an official power of body that makes decisions

blindly – adj. not able to see of notice what is happening around you

doubt – v. a feeling of not being sure about something

prank – n. a trick that is intended to be funny

original – adj. something that is special and interesting because it is not the same as others